Here is a post about Toulouse, our regional capital, as an antidote to all that Royal Wedding stuff (yes, I did watch it, in the company of a group of French and English friends, and a good time was had by all. But now I’ve had enough of it.)

Toulouse is such a big place with so much going on that one little blog post can’t hope to do it justice. It’s known as ‘la ville rose’ (the pink city) because of its pink brick buildings. However, it has to share that title with a number of other towns in the region including Albi and Montauban. The latter is even known as ‘the pinkest of all the pink cities’. 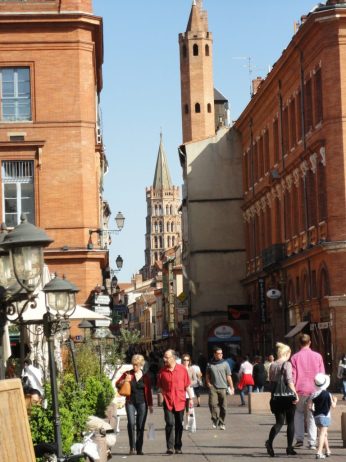 I’m fed up with seeing magazine articles about Toulouse with punning titles such as ‘La Vie en Rose’ or ‘A Rose Red City’. In fact, Toulouse is also known for its floral emblem, the violet. Every February, there is a violet fair, which celebrates all kinds of violet products, from sweets to mustard. Toulouse was also the centre of the regional trade in pastel (blue dye used for colouring cloth). But the pink city soubriquet sticks.

We visited a few weeks ago when I had to attend the regional finals of a language contest (see the post here). We decided to make a day of it and while I slaved away over past participles and indirect pronouns, the Statistics Freak had a look round. He got the better deal.

Toulouse is now France’s 4th city, after Paris, Lyon and Marseille. It seems to contest the title with Bordeaux, but Toulouse is certainly bigger if less refined (Toulousains would probably contest that statement).

There has been a settlement on the site for more than 2,000 years, since this was the last point at which the River Garonne could be forded before the Atlantic Ocean. The Romans occupied it from the 1st to the 5th centuries AD and named it Tolosa. They also brought the techniques of brick and tile manufacture. 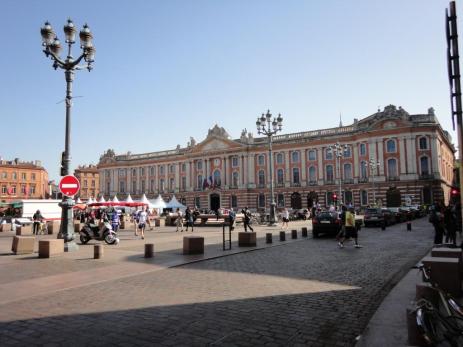 During the middle ages, Toulouse had a turbulent history. The counts of Toulouse were never very secure and suffered from various wars of succession, the incursion of heretic Catharism and the opposition of the Capitouls. The latter were elected by the six different neighbourhoods of Toulouse to administer the city, under the aegis of the count. A Toulouse parliament was instituted in the 14th century but the French Revolution put an end to the city’s relative independence and it became simply a departmental capital.

Toulouse has always been a significant trading centre and much of its late medieval and Renaissance prosperity was founded on the pastel trade. It was also an important stage on the pilgrimage route of Saint-Jacques de Compostelle. Today, it is a centre of the aerospace industry (notably Airbus). In the 14 years we have lived here, Toulouse Blagnac Airport has been developed out of all recognition.

Toulouse has a host of markets, indoors and out. Every Saturday, there is a market in the huge central Place du Capitole, presided over by the grand 18th-century buildings. Cafés line two sides of the square under the arcades. You can sit nursing a cup of (expensive) coffee for as long as you like and people-watch.

Probably the best market is the covered Marché Victor Hugo, where 100 stallholders sell edible products of all kinds. This is how foreigners imagine French markets to be.

This one is a feast for all the senses. There are the colours of the freshly caught fish and shellfish and the vegetables and game; the noise of the busy shoppers debating their purchases with the stallholders; the pungent smell of cheeses and spices; the taste of ringlets of local charcuterie and cubes of regional cheese held out by the stallholders, tempting one to buy; the feel of the vegetables – papery garlic bulbs from the Lomagne, plump asparagus spears from the Landes and smooth aubergines from the Languedoc.

The sight of all this food acts as an appetiser but you don’t have to go far to satisfy your hunger. Upstairs there are five restaurants in a line, where you rub shoulders with the locals and eat locally sourced produce. 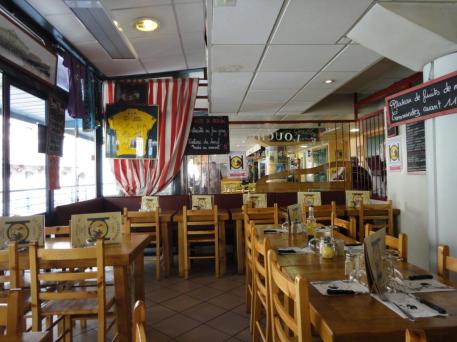 We ate at Le Louchebem (dialect for butcher), where, not surprisingly, they specialise in meat. Since we were in a bit of a hurry, we had just a main course and some cheese. The SF had a rare steak, which he said melted in the mouth. I had an escalope de veau with a foie gras sauce. Sounds horribly rich, but it wasn’t. Washed down with a couple of glasses of Fronton wine (produced 20km from Toulouse) and I was set up for my afternoon’s exam. Le Louchebem do menus from 15 euros on a Saturday – 12 euros during the week. 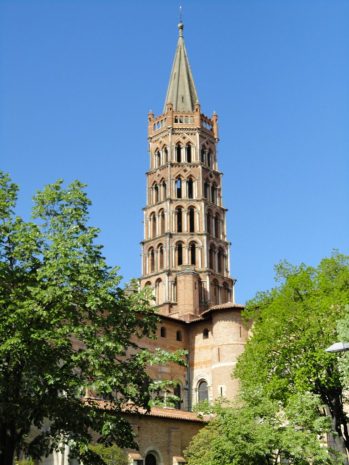 As befits a place of its size, Toulouse is crammed full of museums, art galleries and historic monuments and hosts cultural festivals and concerts by artists of international stature. The best place to find out what you’re interested in is the Toulouse tourist office website (www.toulouse-tourisme.com), navigable in English. It also includes details of events, festivals and guided tours. But here are a few that are worth a visit:

There are also a number of imposing houses constructed by merchants who grew rich on the pastel trade. 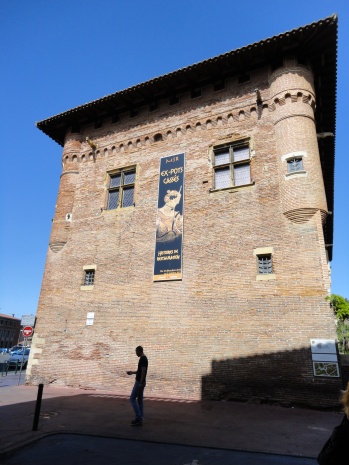 There’s plenty more, so I will probably do some more Toulouse posts in the future.

We moved to an 18th-century farmhouse in SW France in 1997. I'm fascinated by French history, rural traditions and customs. I also write historical novels and short stories.
View all posts by nessafrance →
This entry was posted in French life, History, Places and tagged Basilica of Saint-Sernin, France, living in France, Midi-Pyrenees, Place du Capitole, SW France, Toulouse. Bookmark the permalink.