Since we were in Corsica at the beginning of June I didn’t get round to doing the weather post for May. So now I’m going to treat you to a bumper edition for two months – May and June.

Every month I post an update on how the weather has been, based on the statistics we have kept since 1998. To see the other weather posts, please click on ‘Weather’ under the Topics tab in the right-hand sidebar.

Here are the figures.

Weather assessment for May and June 2011

A quick reminder of our subjective weather assessment: we assign each day a plus if it’s fine, a minus if it’s bad and a zero if it’s indifferent or we can’t decide. We don’t record the temperature since we don’t have an accurate enough thermometer.

This May was the best we have had in the 13 years we have been keeping these statistics. In May, there were:

The chart below shows the percentage of plus days each May for the past 13 years – the line is the trend. Sorry about the uprofessional-looking charts; they don’t upload well. 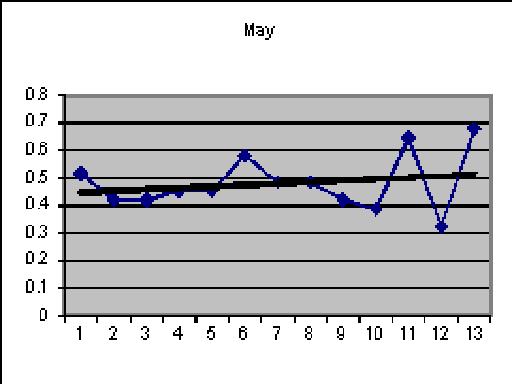 June, by contrast, was not especially good. We have had seven better Junes and six worse. Whereas the trend for May is slightly upwards, i.e. getting better, June is the opposite and getting slightly worse. It used to be one of the best months of the year. In June, there were:

The chart shows the percentage of plus days each June, also for the past 13 years. 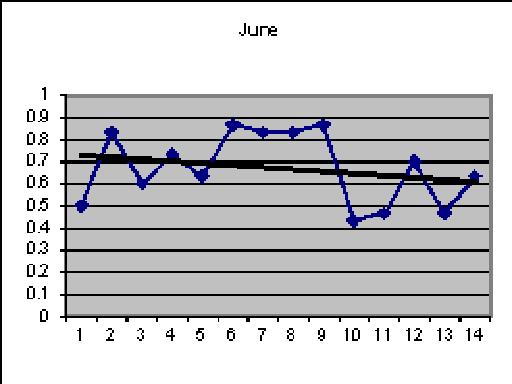 Our rainfall stats go back to August 2004. Despite June being rather indifferent, the rainfall was still less than the average. For the first half of the year, we have had only 70% of the rainfall we would normally expect. In May, we had 77.5 mm against an average of 87.1 mm and it rained on seven days compared with the average of 10.4.

In June, we had 36.5 mm against the average of 58.4 mm, but it rained more often: we had rain on 14 days instead of the average of 9.6 days. Again, the chart has uploaded badly: the blue is the actual, the red is the average.

Drought restrictions are now in place in our Département, which means no car washing, filling up of swimming pools from scratch – though you can top them up – no watering of lawns, etc.

So now we come to July, which has been a very mixed month weather-wise, but the trend is definitely upwards. I am torn: I want the weather to be nice since we will have house guests and there are so many outdoor events going on; but we desperately need some sustained rain.

Finally, a dicton – saying – for July:

We don’t want any of that but I would be surprised if it didn’t thunder at all.