What Do the French Talk About at Dinner Parties? 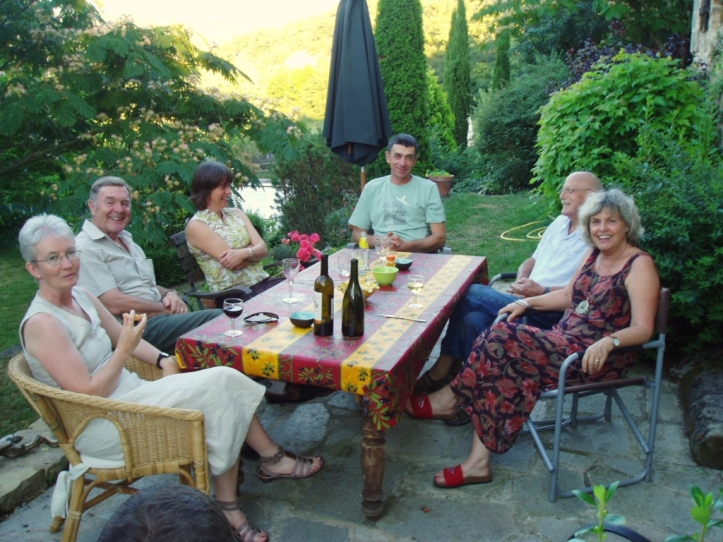 Last night, we were invited to dinner with French friends with whom we socialise regularly. The SF and I have christened our group ‘the Gang’. There were nine of us yesterday. Some of them were born in the region and have retired here; others live in Paris in the winter and spend the summer down here. These are enjoyable social occasions but they also provide the chance to dig ourselves deeper into French culture and to find out what makes the French tick.

Sometimes we hang on to the conversation by the skin of our teeth. Everyone talks at once and they do it at breakneck speed. We regard it as a compliment that they give us no quarter. They are endlessly patient when we get tied up in knots with the language, although it must be irritating for them. Often, though, I get the impression that they forget we are not French, which is fine by us.

Last night, the pre-prandial conversation ranged widely from the rotten weather to a recent spate of fatal car accidents. This led to a discussion about the differences between the UK and French driving licence systems: they lose points for infractions, we gain them. Our friends often express interest in how things work in England compared with France. They were surprised to learn that we had to hand over our UK driving licences and get French ones when we moved here.

However, the French always return to one particular topic of conversation: food.  I know I’m generalising here but stereotypes are usually grounded in truth. After 14 years and quite a few dinner parties I feel I can speak with some authority. There must be French people who don’t talk about food, just as there must be British people who don’t talk about house prices. But I haven’t met them yet.

Moving to the dinner table after apéritifs is normally the signal for the food conversation to begin, although it started well before that last night. Jean, our host, had prepared a delicious guacamole dip to go with the apéros. Everyone wanted the recipe. Marie-Jo and Elsa then had a lively, extended discussion about whether you should include yogurt in hummus. For dinner, Jean had made a couscous with lamb chops and merguez sausages. This sparked off a debate about the respective merits of local lamb suppliers.

Before long, we were chewing over the virtues of tripes and tête de veau (calf’s head). I haven’t eaten either of these delicacies but these were clearly serious matters. Jean deplored the use of tomatoes in tripes à la Lyonnaise. He then extolled his great-grandmother’s tête de veau, which was simmered over the fire for four days. He had never tasted its equal. She lived to 104, so perhaps I should try it after all.

These considerations kept us going to the cheese course. There followed some discussion about how the French regard rules and regulations as a kind of framework within which you can interpret the details pretty much as you like – or ignore them. This prompted Claude to ask the SF if he had retained the Swedish tendency to do as you are told or if he had been ‘contaminé’ (his word) by the French contempt for authority. I chipped in quickly to say that it was definitely the latter.

‘For example,’ I said, ‘He now drives like a true Frenchman. He doesn’t use the indicators and he drives as closely as possible to the car in front.’

It was as if I had lit the blue touchpaper. Far from leaping to defend the honour of the prudent French driver, however, our friends began a heated argument about the correct way to drive on the autoroute. They split into two camps. One maintained that it was okay to drive in the middle lane all the time. This avoided getting boxed in behind slower drivers in the right-hand lane. The other held that you should always drive in the right-hand lane unless overtaking slower vehicles. Cutlery and table mats were press-ganged into service to illustrate the opposing viewpoints, accompanied by cries of ‘Mais non!’ and ‘Écoute bien!’

The SF and I felt it was better not to get involved and left them to it. Eventually, the argument burnt itself out without reaching a conclusion. We moved on to less controversial topics. But the evening was a fascinating insight into what gets the French going.

See also my posts How to Drive Like the French and French Social Customs: Table Manners Part 1.