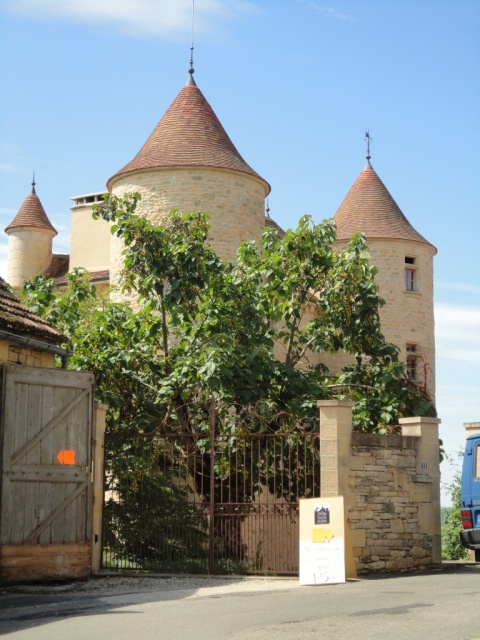 Or, if you want it in English – Parisot International Art Festival. Every year in early/mid-August, this tiny medieval village, perched on a rocky promontory in a secluded corner of Tarn-et-Garonne, is host to an art festival that attracts more than 30 artists. This year, it runs from 12th-14th August inclusive.

This festival has been going since 2007, the brainchild of Toyin Okitikpi, who has a house at Parisot, and a committee of local enthusiasts.

A number of things about it are striking. First, the artists exhibit their works not only in public places like the Salle des Fêtes but also in people’s houses and gardens. 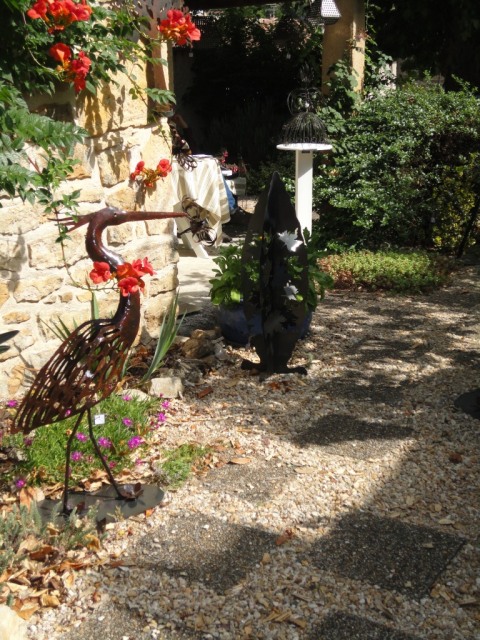 Sculptures in a garden

Second, they manage to attract artists from far and wide, not only from the immediate region.

Finally, the festival is accompanied by a concert in the church each evening. The concerts are invariably of a very high quality. For the second year running, a talented ensemble of six young French musicians, Phaéton, will play a programme of classical music. Not to be missed on any account if you are anywhere nearby. The concerts start at 20h30. 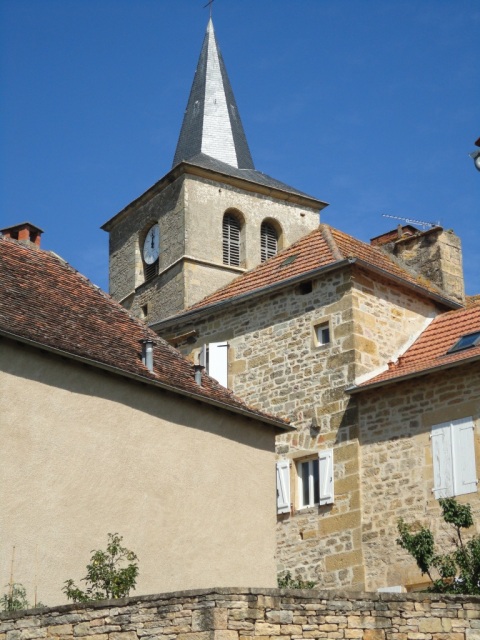 A number of our friends, such as James Burr, a print-maker, exhibit (see one of his works below).

We were also pleased to note this morning, when the festival started, that several new exhibitors are taking part. It’s not just paintings and sculpture, but also woodwork, jewellery and photography.

Parisot itself has been there for a long time. It started life as a Roman castrum, or fort, which took the name of its commander, Parisus. It belonged to various Rouergat monasteries in the early middle ages and then came under the aegis of the Comte de Toulouse. The seigneurie of Parisot came into the La Valette family in the 14th century.

The most famous representative of that family was Jean de La Valette-Parisot, who was grand master of the Order of the Chevaliers de Malte in the 16th century. He was born at the Château de Labro on the banks of the River Seye, now sadly in need of restoration.

As always, the history is complicated, but his defence of Malta against the siege of Suleiman the Magnificent in 1565 was the climax of a bitter struggle between Christian western Europe and the Ottoman Empire for control of the Mediterranean. The capital of Malta became La Valette (or Valetta) in honour of Jean de La Valette-Parisot.

Although ostensibly a typical sleepy French village, Parisot has smartened up its act in recent years. The château (see above) has been extensively restored by private owners; a thriving library/médiathèque is associated with a range of cultural events throughout the year; there is a small but lively market every Friday morning; and a new medical centre has been constructed on the site of the former college.

Not to mention the Festival d’Art International… [BTW, I can’t make this link work myself and neither can the SF from his computer. It comes up with an error message each time. Maybe it’s just our unsophisticated software. The organisers assure me it’s correct. Has anyone else had problems when clicking on it? Apologies, if so.]