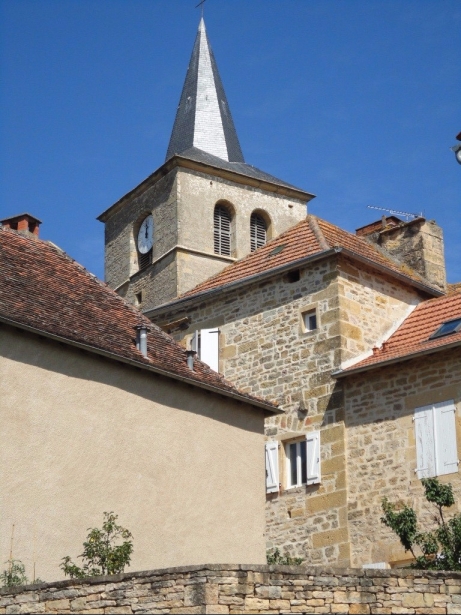 We’ve just got home from a choral concert given in the Eglise de Saint-Andéol (above) at Parisot. The Chantier Voix choir from Limogne (Lot) interpreted a range of songs from negro spirituals to Russian Orthodox sacred music to Corsican polyphonic chants. Very good it was, too.

However, to paraphrase Virginia Woolf, it is in the nature of churches to be cold and this was a church to the core. Unfortunately, the electricity in the church chose the coldest day of the year so far to go on the blink. Result: no heating. Thankfully, the choir kept it short and sweet and skipped the interval. We’ve got the woodburner going full blast and I’m now thawing out.

However, this has nothing to do with the post I started to write earlier to which I will pass on without further ado.

Angela, a colleague on Writers Abroad, wrote a great blog post on that site recently, about the howlers that foreigners make in another language. She referred mainly to her Dutch students, since she is an EFL teacher. However, some of their gaffes recalled the painful moments we have experienced during our life in France – and even before.

If only we all spoke the same language, preferably English. However, the fact that we don’t produces some entertaining malentendus. Translating literally from one language to the other is always perilous, like the time I announced loudly at the end of a meal, “Je suis pleine”. Alas, this does not mean I am full up. It means drunk or pregnant.

A lot of French words look similar to each other but have very different definitions. Even the SF, who has lived in France longer than me, is not immune to the blunders this can generate. On one memorable occasion, we were invited to a dinner party where we were the only non-French. We discussed smoking and how it had declined. The SF turned to his neighbour, a rather imposing lady, and asked, “Vous êtes fumier?” There was a stunned silence. Realising what he had said, I snorted with laughter, whereupon the French also saw the funny side. Fumier means a heap of manure or a shit when applied to a person. It’s close enough to fumeur/euse (smoker) to confound even a veteran expat.

Then there are the hundreds of English and French words that look similar but mean quite different things – the so-called faux amis (false friends). For example, actuellement doesn’t mean ‘actually’ in the sense of ‘really’. It means ‘currently’. Similarly, officieux doesn’t mean ‘officious’; it means ‘unofficial’.  The list is endless.

Sometimes faux amis trip one up with entertaining results. A while ago I heard about an English woman who wanted to curry favour with her severe French mother-in-law. She declared that she liked French food because it didn’t contain préservatifs. Far from mollifying Madame, this made her even less agreeable, since préservatif is the word for condom. (An interesting aside: the French call condoms capotes anglaises while we call them ‘French letters’).

I find some reassurance in the fact that it works both ways. Our local doctor speaks English, which is helpful since he has a lot of British customers these days. Although I now speak French with him, in the early years we spoke English. Once, I asked him why I kept getting an annoying but not serious complaint. He replied, “Maybe you are sensible.” I appreciated the compliment but, of course, he meant ‘sensitive’, which is what sensible in French means.

On another occasion, a local French restaurant had obligingly translated the dishes on the menu into English. Among the delicacies on offer was ‘salad of lawyer and tomatoes’. Avocat, of course, is not only avocado but also lawyer/barrister. They had a 50% chance of choosing the right word in the dictionary…

What amusing blunders have you made or heard about?

15 Responses to Found(ering) in Translation