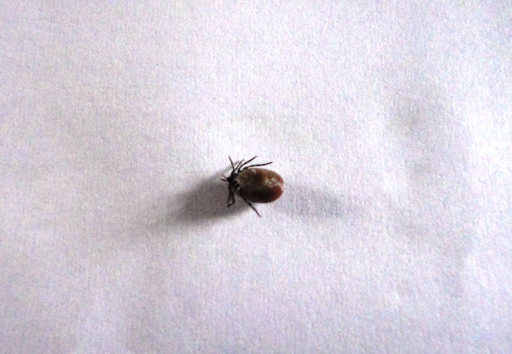 Before we moved to southwest France I had never seen a tick. They are very unpleasant blood-sucking creatures that make my flesh creep when I think about them. Unfortunately, they are endemic in our neck of the woods and have been for some time. At this time of year, they become particularly active. Above is one I removed from the cat this morning.

Ticks endemic to the area

This area used to be a sheep-rearing region. Our neighbour, Mme F, tended the sheep when she was a girl. We know that up on the causse above Caylus, where the military camp is, the whole area was given over to sheep grazing. There were no trees and the militaires were able to hoist a flag when they wanted to signal an impending artillery barrage. Nowadays, although there are a few flocks of sheep, cows are now the main type of farming in the area.

The sheep have left their legacy in the form of ticks. Deer and other wildlife no doubt carry them, too. These nasty creatures are related to spiders and have eight legs. They have the ability to remain dormant, attached to a blade of grass or a twig until a warm-blooded animal brushes past. Then they transfer themselves to the animal and insidiously crawl on them until they find a suitable place to corkscrew in their heads and start gorging on the blood. They inject an anti-coagulant to assure an uninterrupted flow of blood. Apparently, fossil evidence shows that these creatures have been around for at least 65 million years.

They are especially bad this spring. I spend a long time inspecting our cat, which has long fur, for evidence of them crawling over his coat. Sometimes they are already buried in his flesh, like the one above. Fortunately, in the case of cats, our vet tells us they can’t transfer any nasty illnesses, unlike in dogs. Nonetheless, it’s not a good idea to let them reside for any length of time, since they can cause inflammations of the skin. Our vet sold us a very useful tool for removing them, a bit like a mini crowbar. It’s very effective: you just grip the tick, turn it clockwise and it comes out, head and all.

Over the years here, I have found several of these beasts embedded in my flesh. You normally find them when you’re in the shower or towelling yourself down afterwards. Then, a small black dot attached to the back of your knee turns out to be rather more firmly attached than you realised. They burrow their heads into your flesh and if you try to pull them straight out the body comes out but the head remains embedded, which can lead to an infection.

The first time I had one (they seem to go for me rather than the SF) I dispatched the SF down to the chemists to find a remedy. That morning, there were a lot of people in the shop and they all piled in with their pet method for removing them. These ranged from the quite sensible (ether) to the frankly bizarre or unpleasant (dig them out with a sharp knife). We opted for the ether and it did the trick on that occasion but it doesn’t always work.

‘Lymie’ who has commented below stresses the importance of correct removal. Here is the link to the site she mentions, which provides a lot of detail about tick-borne diseases.

Certain varieties of tick are known to be carriers of Lyme disease, which can cause severe neurological damage if not treated. Lyme is not a person but a town in America. Children there were noted in the 1970s to suffer from what was thought to be juvenile rheumatoid arthritis but the condition was eventually isolated to tick-borne infections. In Europe, Lyme disease is more prevalent in the central areas and much less so in the south. Our French GP told me that he had never seen a case of Lyme disease in 20 years here.

I know there is a tick patiently waiting for me on a small shrub in our garden. It has flattened itself out against the stem, almost imperceptible, waiting for a warm-blooded creature to come past. However, I am just waiting for the rain to stop before I go and exterminate it. The trouble is there are plenty more where it came from.

We moved to an 18th-century farmhouse in SW France in 1997. I'm fascinated by French history, rural traditions and customs. I also write historical novels and short stories.
View all posts by nessafrance →
This entry was posted in French life, Nature and tagged farming, Lyme disease, sheep ticks, sheep-farming, SW France. Bookmark the permalink.

14 Responses to Ticked Off