We wanted rain. We got rain. This April has almost beaten our record for rainfall and it has certainly been the worst month weather-wise since we started recording our statistics 14 years ago. Everyone is thoroughly fed up. A number of people have landed on my blog, having entered the search term, ‘Why is the weather so bad in SW France?’ into their search engine. Here are the details.

Every month I post an update on how the weather has been in our corner of southwest France, based on the statistics we have kept since 1998. To see the other weather posts, please click on ‘Weather’ under the Topics tab in the right-hand sidebar.

A quick reminder of our subjective weather assessment: we assign each day a plus if it’s fine, a minus if it’s bad and a zero if it’s indifferent or we can’t decide. In April, there were:

The chart shows the percentage of plus days each April for the past 14 years (the line is the trend). As you can see, April 2011 was the best April we have had. By contrast, April this year was not only the worst April but the worst month we have had during all the time we have been collecting the statistics. 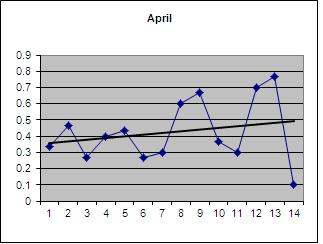 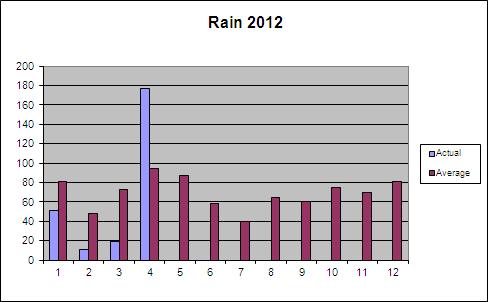 Our rainfall stats go back to August 2004. This month we had almost double the average rainfall for April over that period. In one sense it’s just as well since it was desperately dry in March. We were already watering, which is unheard of at that time of year, and the aquifers desperately needed filling up. A blogging friend who lives by the River Lot emailed me today to say that the level in the river was high and the water was like melted chocolate: a far cry from a walk we did in the autumn when we were able to walk along the bed of a stream and keep our feet dry. 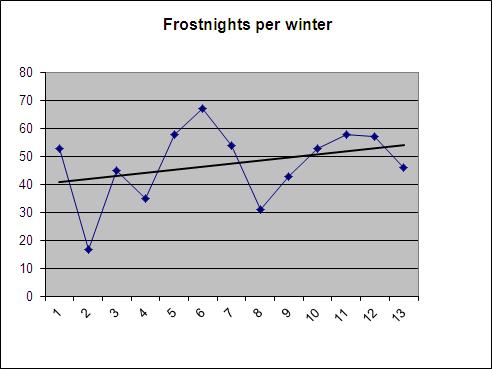 This month we had one frost night, which did our recovering plants and shrubs no good at all. Despite appearances to the contrary, this winter was not particularly rigorous, except for those two ghastly weeks in February. Apart from that, the number of frost nights was less than during the previous three years. As you can see from the chart, though, it seems to go in cycles.

In April this year, I managed to get out to work in the garden for three afternoons, including last Saturday, when I mowed and strimmed like a mad thing in a force 10 gale. Everything is terribly behind. We have not yet opened our swimming pool, which we normally do in March. The earlier you open it the more likely you are to avoid problems with algae etc. This year, we simply haven’t had the opportunity but are hoping to do so this week.

De la pluie le premier jour de mai, ôte aux fourrages de la qualité. If it rains the first of May, the fodder will be of poor quality.

Thanks for reading. Shares always appreciated.