Down here, the beginning of July was exceptionally cool, the end extremely hot. The latter, of course, gave rise to a violent storm on the night of the Olympic opening ceremony. It passed directly overhead, knocking out the transformer down the lane and part of our satellite Internet connection, among other things. I’ll say more about this in a separate post – I think thunder storms here are spectacular enough to merit one. Suffice it to say that it caused us massive inconvenience, from which we are only just emerging.

Every month I post an update on how the weather has been in our corner of southwest France, based on the statistics we have kept since 1998. To see the other weather posts, please click on ‘Weather’ under the Topics tab in the right-hand sidebar.

A quick reminder of our subjective weather assessment: we assign each day a plus if it’s fine, a minus if it’s bad and a zero if it’s indifferent or we can’t decide. In July, there were:

These figures seem to belie the fact that the month started badly. The weather brightened up after the first week but remained cool for a further week. It’s only the last two weeks when temperatures were at seasonal norms.

The graph shows the percentage of plus days each July for the past 15 years (the line is the trend). Six months of July were better and eight worse so this July was about average. 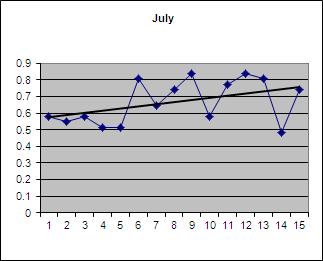 Our rainfall stats go back to August 2004. Rainfall this month was almost spot on the average at 40 mm against 39.8 mm. It rained on 7 days; the average is 6.6 (or, effectively, 7). We are still running at a bit of a deficit but the heavy rainfall in April made up a lot of it. 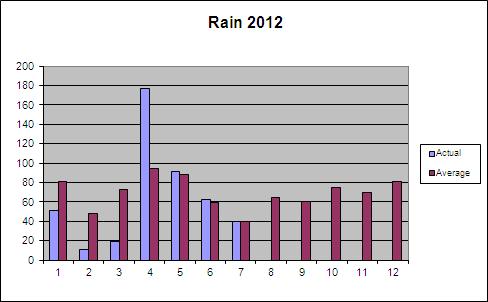 To finish, a weather dicton (saying):

I can’t say I agree. Thunder at the end of July was massively inconvenient to us personally. But I suppose if it averted worse afflictions we should be satisfied.