How many of us can claim really to know the place we live in? I’ve always contended that, as a tourist, you find out more about places because you are not subject to the duties and distractions of daily life. I’ve lived in SW France for 15 years – almost to the day – and yet I knew embarrassingly little about our local village. At least until last Thursday when we took a guided tour of Caylus, aimed at – guess who? – tourists.

Caylus – Cailutz in Occitan – is a village in north-east Tarn-et-Garonne. Its oldest remaining parts date from the 12th century but there was certainly a settlement there before that. The origins of the name might stem from a Roman commander, Caius, who lit bonfires on the hill, hence the “lux”. It might also be a corruption of the word “castellucium” (little château).

The village started small around the now-ruined château. It gradually spread out and its ramparts were rebuilt at least once to accommodate the growing population. As part of Simon de Montfort’s barnstorming trip around this area during his self-aggrandising Albigensian Crusade, he sacked Caylus and burned the “suburbs” in 1211.

We saw many things during the 90-minute tour that we previously knew nothing about. Instead of telling you everything, I’ll select some highlights.

You have to look up in Caylus to see some of the sights (while also watching what you tread on). The house of the wolves is so called because some of the prominent gargoyles resemble wolf-like creatures. The house was built in the 13th century and has been altered over the years. The original windows were much bigger, for example. 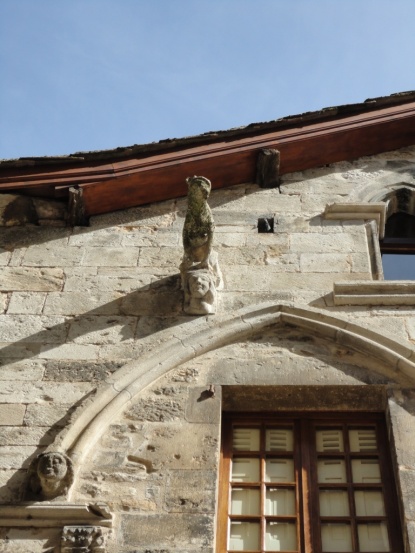 Ossip Zadkine (1890-1967) was a Russian sculptor who fell in love with this area thanks to friends with a house at Bruniquel. He bought a house in Caylus but didn’t stay very long because of the traffic(!). He moved to Arques in the Lot. His wooden sculpture of Christ on the Cross is in the church at Caylus (founded in the 12th century and rebuilt in the 14th). He didn’t believe in cutting down live trees and sculpted only from wood that was already dead.

He saw the possibilities in this particular trunk and crafted an unusual crucifixion. There is no cross. Instead, Christ raises his arms in what is interpreted as a victory V gesture.

Another peculiarity is that, originally, the Christ had a prominent phallus. The prudish parishioners of Caylus were scandalised by this. Zadkine agreed to come back and reduce it.

In the Middle Ages, two fountains provided all of Caylus’ water. This one is below the village centre in an area where tanneries originally operated. The fountain has never dried up, even in the hot summer of 2003. However, the Caylusiens abandoned it in 1722 when they considered it responsible for spreading the plague epidemic of that year. They abandoned the other village fountain for the same reason.

This staircase is in an interior courtyard off la rue Droite. I had no idea it was there. The paint is clearly not original. But, in the heyday of the pastel trade paint was made from pastel dye. It was used to paint wooden frames, doorways and staircases and acted as a fly-repellent.

The colour was immaterial: a substance given off by the pastel probably repelled them. This was terribly important in the days when Caylus had a significant livestock fair.

I have saved my favourite for last. Caylus and neighbouring Saint-Antonin-Noble-Val have always been at odds. Today, the rivalry is not hostile. But during the Wars of Religion, the two towns were at daggers drawn. Caylus was staunchly Catholic while Saint-Antonin was equally staunchly Calvinist. Louis XIII even came to Caylus in 1622 to direct the siege of Saint-Antonin during the Huguenot rebellion and the house where he stayed still stands. 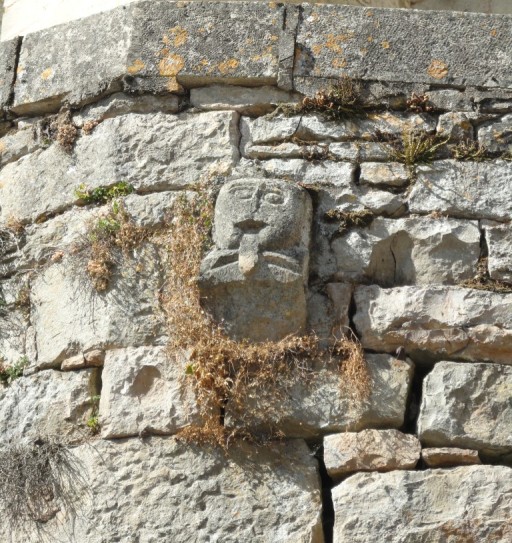 The Caylusiens embedded this gargoyle into the town’s ramparts, depicting a Caylusien poking out his tongue at the heretics in Saint-Antonin. It is not in its original situation since the ramparts were rebuilt but it was felt to be a sufficient curiosity to retain.

There’s plenty more. And the ruelles of Caylus merit a wander around. The village suffers from the busy D926 trunk road slicing through it but, once you’re off the main road in the old town, it’s much quieter. 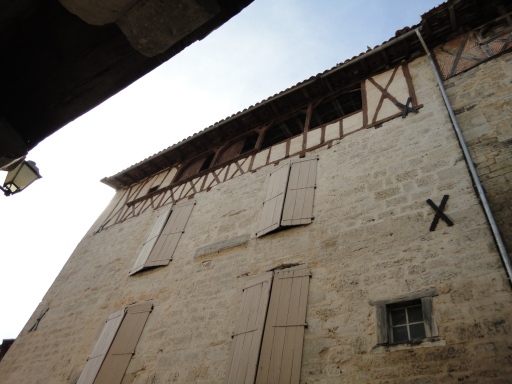 We moved to an 18th-century farmhouse in SW France in 1997. I'm fascinated by French history, rural traditions and customs. I also write historical novels and short stories.
View all posts by nessafrance →
This entry was posted in History, Places and tagged Caylus, French Wars of Religion, Maison des Loups, Ossip Zadkine, Saint-Antonin-Noble-Val, Tarn-et-Garonne. Bookmark the permalink.

17 Responses to Five Curiosities in Caylus