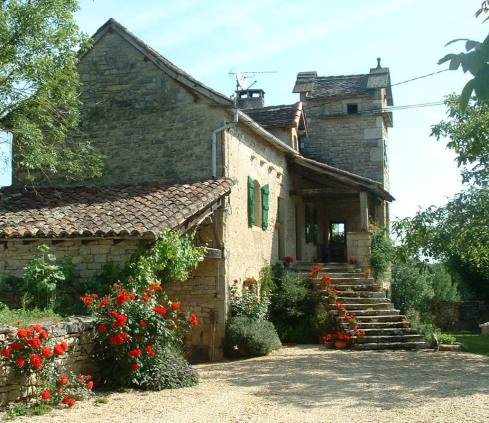 We moved into our house 15 years ago today. I have never lived anywhere as long as I have lived here. But it has gone in a flash. I’ll also tell you in this post about how my blog achieved 15 seconds of fame – a far cry from Andy Warhol’s 15 minutes, but then you have to start somewhere. The two stories are not unrelated.

We left England on 20th August 1997 on the Eurostar, each bearing a suitcase. The rest of our worldly goods were in a huge pantechnicon, which was due to arrive at La Lune a week later. Arriving at Montauban station, we emerged from the air-conditioned TGV into a heat wave, not unlike the one we experienced last week. Naïve as we were, this is how we thought the weather always was in the south of France.

The first few days passed in a frenzy of buying cookers, collecting our new car and doing all the administrative bits and pieces. We moved up to a Caylus hotel for a couple of nights until the previous owner had moved out of the house. The agreement was that the removal van would arrive mid-afternoon, so we enjoyed a leisurely lunch. Turning up around 3 pm we found the removal men hanging around smoking. They had been there for a couple of hours. The van could hardly get up the lane for the overhanging trees so they were not in the best of moods.

The two brawny Brummies hefted our stuff in the house in record time. They plainly couldn’t see the attraction of the place.

“Do you know anyone here?” they asked.

“No,” we said. They looked at each other, trousered their tip and couldn’t get away fast enough. La France profonde was clearly not their tasse de thé.

This was the start of a big adventure for us – not least getting our heads around the language. My ‘O’ level French was not up to the job. During the first year my vocabulary expanded but my ability to wield it didn’t. So we took four years’ worth of French lessons, which was one of the best investments we have ever made. We are never going to speak French like the natives – our accents give us away – but at least we can communicate without many difficulties. The exception is speaking to people on the phone, an instrument I have never liked using even when speaking my own language.

Apart from the inevitable brushes with French bureaucracy and the occasional culture clash, we have never looked back.

And so, onto my blog’s 15 seconds of fame. Idly Googling myself – don’t tell me you never do it – I came across a series of podcasts produced by Mark Johnson and Lloyd Arrow entitled “A House in France”. They wanted to give others the benefit of their experiences of buying and building property in France. Episode 13 is entitled, “Keeping a Record”, about recording your experiences of buying and restoring or building a property. Out of the legions of blogs about life in France, Lloyd kindly chose Life on La Lune as an example, complete with screenshot of the front page.

Their videos contain a lot of good advice, which they have supplemented with fact files. You can see their podcast website here and there’s an associated blog.

The SF and I have a bottle of fizz on ice to celebrate our first 15 years at La Lune. Here’s to the next 15.

We moved to an 18th-century farmhouse in SW France in 1997. I'm fascinated by French history, rural traditions and customs. I also write historical novels and short stories.
View all posts by nessafrance →
This entry was posted in French life, Places and tagged blogs about France, living in France, SW France, Tarn-et-Garonne. Bookmark the permalink.