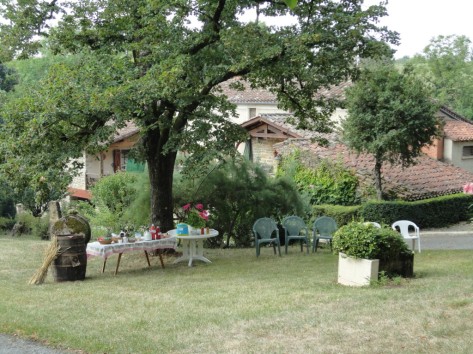 The hamlet of Flouquet

The last of the summer walks at Espinas took place yesterday. As ever, our guides Nadette and René Curato have provided lots of interesting information about the history and culture of the places we have seen. Almost every year one of the walks takes in the hamlet of Flouquet (pronounced “Flookett”). There, we receive a warm welcome from its only remaining inhabitants.

I did actually write about Flouquet when we last went there two years ago. However, I forgot to take my camera, an error that I rectified this time.

Like so many villages and hamlets, Flouquet has suffered from rural depopulation. Only four people now have houses there and they don’t live there all the time. In its heyday in the 1620s the hamlet probably had around 80 inhabitants. One of our hosts, the poet Gilles Sicard, evoked how the place would have been then. He poetically described the sights, sounds and smells you would have encountered in a typical French hamlet.

Some of the houses have no doubt been demolished over the years but several remain around a central village green, as well as the “four banal”, the communal bread oven. Our hosts lit the oven especially for us and warmed up delicious, flaky croissants in it, which we devoured greedily. 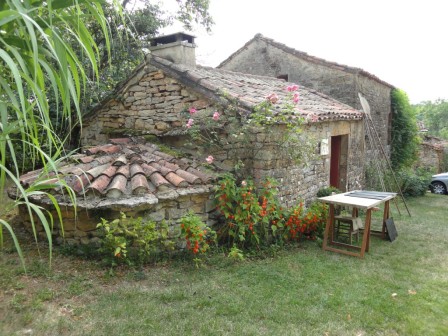 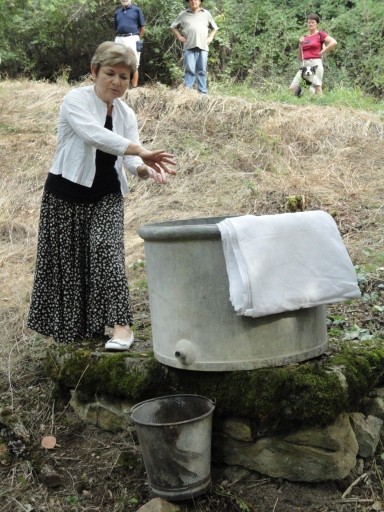 One of the highlights of the visit is a demonstration of washing day, which took place three or four times a year in bygone days. A woman who still has a house at Flouquet tells us how she helped her grandmother with the washing. First, they boiled water and poured it over ashes in a large tub. Then they placed the linen in the tub with the ashy water and tamped it down. To start with, the water ran red from a spigot at the base of the tub. When it was no longer red, it was a sign that the linen had absorbed the lessive (washing powder).

Then they took the linen to the lavoir (washing pool) down a steep hill at the back of the hamlet. Here, they soaped the linen and beat it with wooden paddles before rinsing it and pushing it back uphill in a wheelbarrow to lay it out on the bushes to dry. No wonder they did it only a few times a year. 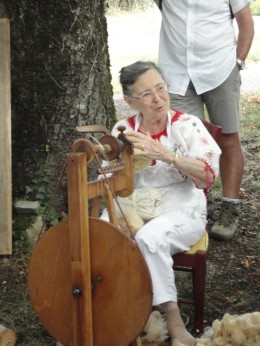 Next up was a delightful lady who demonstrated wool spinning in the ancient way. She has an atelier in the rue Droite in Saint-Antonin-Noble-Val, where she produces wool and makes clothing from it. She explained how the wool was first washed in the River Bonnette and then went through various processes before being spun into yarn. Mostly, the wool was a grey-white colour. However, wool from sheep that graze at a nearby hamlet called Joany always has a yellow tinge. She assumed that this has something to do with the soil there.

Before coffee and croissants, we also saw a collection of old implements. 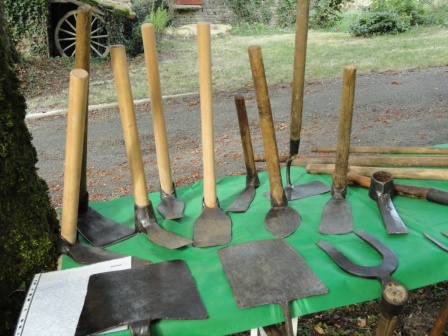 On leaving the hamlet, we passed an open-fronted barn containing various old carts and agricultural machinery. This included the machine below, which I think is an apple press. I should have asked. Any ideas? 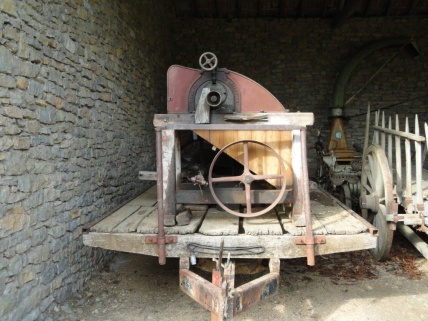