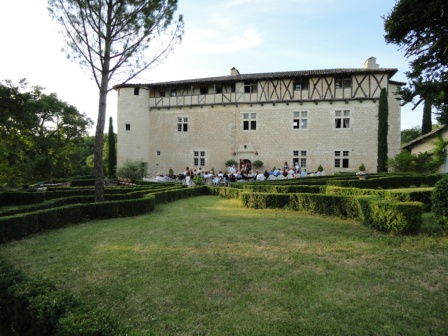 One of the pleasures of summer life in SW France is the range of events that take place outdoors (weather permitting, of course). For almost the whole of July so far the weather has permitted and, having been starved of sunshine for about six months, we have taken full advantage. One of our favourite places is the Château de Mayragues in the Tarn, not far from Castelnau de Montmiral, where they put on several open-air concerts every year.

It’s a 45-minute drive from here but we try to go at least once each year to the outdoor chamber music concerts, which they hold in front of the wonderful château. It’s a fortified house rather than a château on the Loire scale and it’s a magical setting in which to hold these musical events.

Alan Geddes (Scottish) and his French wife Laurence bought the place in 1980 because they were interested in having a vineyard. Then, despite already having been classified as an historic monument, the house was virtually a ruin. So their first concern was to stop it falling down before restoring it to its former glory. After many years of working with Bâtiments de France – who regulate historic monuments – and a specialist builder, they have finally recreated a wonderful piece of patrimoine (cultural heritage). 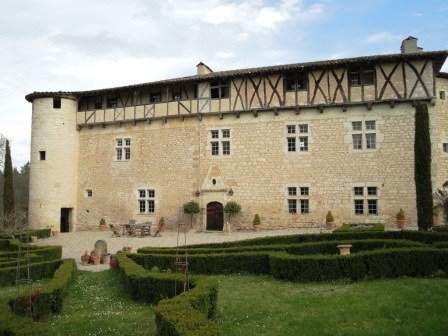 Close up of Château de Mayragues

The house dates back to the 12th century. Set on a rocky spur and surrounded by rolling countryside, it is a rare example of its type, with a covered walkway running around the entire top floor. The château was enlarged in the 17th century and the interior décor refurbished, including a superb stone staircase and an ornate fireplace in a bedroom. A pigeonnier perched on four stone columns is also listed. 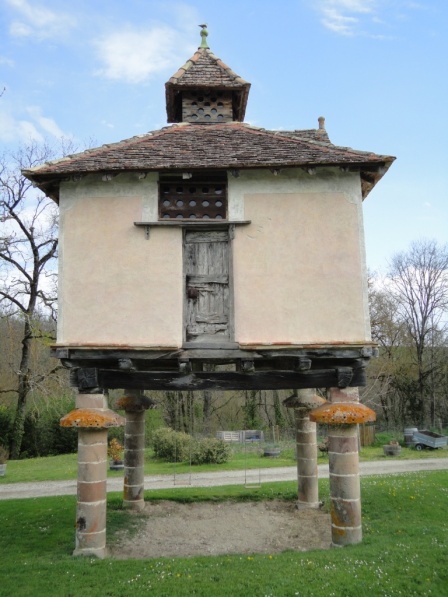 We went on Wednesday with friends, who were entranced by the setting. The musical ensemble, Architecture et Musique, headed by oboist Laurent Hacquard, put on the concert. This time, it was a trio of oboe, flute and cello and the theme was le siècle de lumière, i.e. the 18th century. The programme covered works by Marin-Marias (who was eclipsed by Lully but came into his own after the latter’s death), Handel, Telemann, Quantz, Haydn and Salieri.

Le Château de Mayragues is a vineyard (Gaillac appellation) producing organic wines. In the interval, they serve a glass of their own wine in the garden.

Of course, playing in the open air has its hazards. First, the weather. Despite most of July being fine, thunder storms were in the air on Wednesday, so the interval was postponed till the end, au cas ou. As it happened, the weather was perfect and around 200 people listened to the music without meteorological interruption. 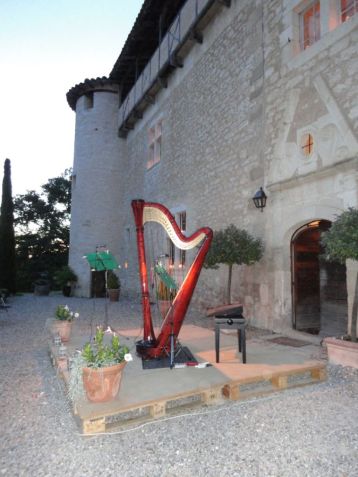 Concert with harp on a previous occasion

However, there were plenty of interruptions of other sorts: a pigeon set up in competition in a nearby tree; a woodpecker flew about, uttering its laughing jackass call; the Geddes’ dog, banished to an outhouse, spent most of the time barking; a helicopter hovered overhead; a combine harvester chewed a nearby field; finally, a gust of wind took away the cellist’s music during his solo piece. It was a mark of the musicians’ professionalism that they didn’t turn a hair. The cellist simply picked up and rearranged his music, secured it with a clothes peg and started again from the phrase in which the breeze had interrupted him.

On a previous occasion, the Geddes family cat had to be forcibly removed from the scene for loudly voicing his opinion of the music. But despite these things – maybe even partly because of them – going to one of these concerts is a wonderful experience.

The château is not generally open to the public, except during les journées du patrimoine every September. So please don’t just turn up – unless you want to buy some wine.

10 Responses to Open-air Concerts at the Château de Mayragues