An Opportunity to Meet French Schoolchildren 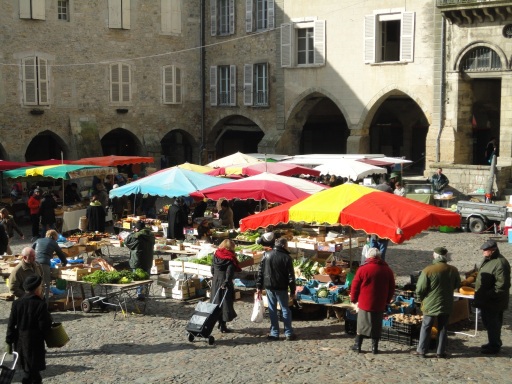 We attended a rather nice event last Friday at a school in Villefranche-de-Rouergue. Le Lycée Beauregard, a secondary school, invited local English speakers to meet the students and talk to them – in English.

A couple of weeks ago we received, out of the blue, a letter from the deputy head teacher inviting us to attend. The letter was charmingly, if slightly inaccurately, phrased. But hey, who are we to criticise? The intention was perfectly clear: would we like to come along to a kind of open day and speak with the students and teachers?

At first, we were a bit mystified about how they had got hold of our names. English friends enlightened us: the local dentist had provided them. Intrigued, we replied in the affirmative.

On the day itself, the SF and I drove to where we thought the school was located. We were in the right general direction but headed off down several culs-de-sac before finding the right place. Perhaps they should have provided a map. Other invitees were of the same frame of mind. Never mind: we got there in the end.

I’m not always proud to be British but on this occasion I think we did okay. The SF (who is actually Swedish) and I thought we might be among a small minority. Not a bit of it. The British contingent was out in force. The students huddled in corners to start with, chatting and giggling amongst themselves, like adolescents the world over. They hadn’t reckoned with the force of Britannia, though. We launched ourselves like guided missiles to prise them out of their coteries.

Once they got talking, most of the students’ shyness fell away. Of course, some of them spoke English better than others and we had to speak slowly and clearly so that they could understand. But, I reflected, that’s how it was for us when we first moved here. Fortunately, the SF and I both speak French well so we could carry on bilingual conversations with our victims when they plainly didn’t understand our English.

Once we had broken the ice, the noise level rose. The head teacher then bravely gave a speech in English, which had clearly been prepared for him by someone else. A couple of teachers introduced the students and got them to answer a few questions in English, which must have been an ordeal for them. And then we were regaled with foie gras and apéros.

This particular secondary school was originally designated to specialise in agriculture. However, we were told that this was no longer the case and they teach a range of subjects. Nonetheless, they still have a ‘factory’ where they produce and package foie gras and a shop that sells it, which is open once a fortnight.

At the end, we guests filled in a short questionnaire, which asked if we would be prepared to come back and do this again, perhaps in smaller groups with more closely-defined topics. The SF and I said yes. Learning another language is so important in many ways. Not only can it be a passport to jobs but it opens the door to other cultures. And recent research shows that it can fend off Alzheimer’s disease for up to five years. I wonder if the effect is extrapolated according to the number of languages you learn. I’d like to think so.

I also think it’s helpful to show young French people (and their teachers) that we Brits don’t necessarily have horns and a tail. As it’s helpful to us to show that they are just like young people everywhere. So we were pleased to applaud this initiative and encourage it for the future. Okay, there are still cultural gulfs between us but I like to think that we closed the gap a little last Friday.

My French isn’t that bad, then
Speaking in tongues; or why I have trouble with my own language
Exams French Style

And, for other posts about language, please click on ‘Language’ in the Topics tab in the right-hand sidebar.

4 Responses to An Opportunity to Meet French Schoolchildren