The Day the Village had No Bread

Our life here has its Clochemerle moments (explanation below). I experienced one of them yesterday when our local village had no bread. Bread is not just the staff of life to a French person; it’s an essential accompaniment to every meal. Yesterday, there was a whiff of revolution, which I compounded.

Clochemerle is a novel by Gabriel Chevallier, published in 1934.  A TV adaptation was screened in the UK during the 1970s. The town council of Clochemerle decides to erect a urinal in the village, but this decision splits the inhabitants into two opposing camps. Eventually, the anti-camp blows up the offending convenience with dramatic and remarkably authentic-looking results. The series was a kind of leitmotif for French local life. Whilst it’s clearly over-exaggerated, it does have a certain relation to reality.

Some friends kindly invited our walking group for apéritifs following yesterday’s walk. When we arrived, we realised that this was not just a drink with a few nibbles, but a three-course meal.

Our hostess told us there was a bread crisis: both boulangeries in the village were closed. On a Wednesday? This is virtually unheard-of.

Normally, the tabac comes to the rescue, since it’s a depôt de pain for the boulangerie in the next village. Alas, the boulanger had forgotten to put salt in the bread, so the first fournée (batch) was no good and a new batch had to be hastily prepared. Sod’s law was operating with a vengeance. 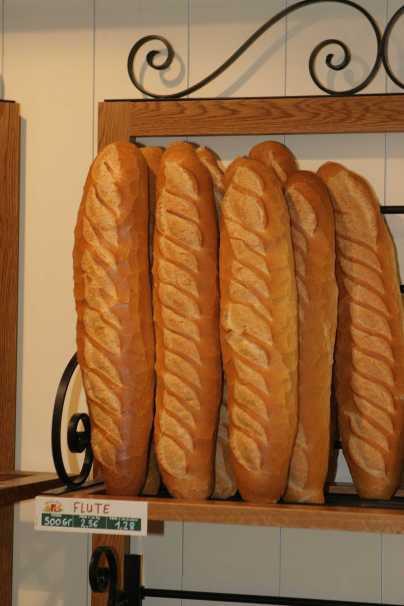 So our hosts ordered four flûtes to be collected later. Having offered to help, I was duly despatched to fetch them. A group of disconsolate-looking locals had collected near the door of the tabac.

“Are you queuing?” I asked.

As one, they nodded balefully. The bread shelves were empty and it was ten to twelve: almost lunchtime.

Out came the lady who runs the tabac.

“Hasn’t the bread arrived yet?” I said, expecting an extended delay.

She shook her head. I explained that my friend had ordered four loaves and had sent me to collect them.

“Oh yes! I put aside some loaves from the earlier delivery.”

She handed them over. I then had to run the gauntlet of the folk queuing for the later delivery. I felt their gaze raking me and the bread like machine-gun fire.

Clutching the bread to my chest, I made it onto the street, only to be confronted by the local menuisier (carpenter).

“Has the bread arrived?” he said, his face lighting up.

“Not exactly,” I said, and explained why I had bread when no one else did.

“I’ll buy it from you,” he said, only half joking.

As other bread-less people descended the street towards the tabac, there was a distinct sense of discontent. I judged it prudent to beat a hasty retreat. I may leave it a few days before venturing into the village again…

We moved to an 18th-century farmhouse in SW France in 1997. I'm fascinated by French history, rural traditions and customs. I also write historical novels and short stories.
View all posts by nessafrance →
This entry was posted in French life and tagged boulangerie, Clochemerle, French bread, living in France, rural life, SW France. Bookmark the permalink.

16 Responses to The Day the Village had No Bread