Château de Najac with the Seneschal’s House to the left.

On autumn mornings, it rises out of the mist, perched on top of its pinnacle; while on summer evenings, it seems to float in the sky, lit from below. The fortress is a landmark for miles around, standing sentinel over a loop of the River Aveyron, which flows far below. The château enjoys a panoramic view of the surrounding hills and the river valley. The perfect place to site a defensive citadel.

And the perfect place to imprison undesirables. I wonder how the region’s Templars felt in September 1307 as they approached this forbidding stronghold from which escape was unthinkable. They had been rounded up throughout France on the orders of Philip IV, le Bel, in one of the biggest such operations in history. The king, who coveted their fabulous wealth while fearing their power and influence, had them charged with heresy. Najac was one of the places chosen to imprison them. 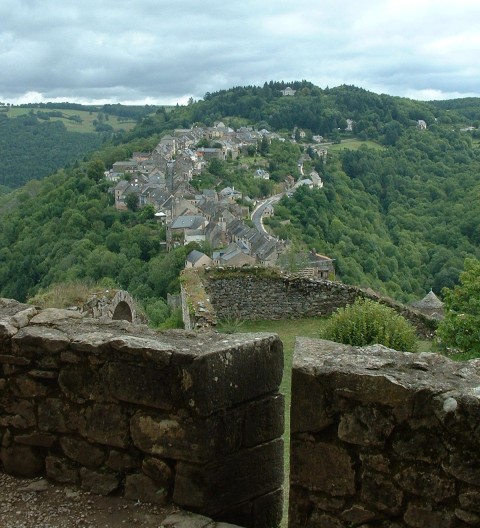 View from the top

The original château was built in the 11th century by Bertrand of Saint Gilles, son of Raymond IV of Toulouse, and the town developed around it. In contrast to its present population, Najac was once an important township with around 3,000 inhabitants.

France was not then a homogeneous country. Especially in the south, it was a loose confederation of minor nobles who paid homage to more major ones, like the Counts of Toulouse and the Dukes of Aquitaine. They guarded their territories with châteaux, which were intended to keep the local people in order as much as to defend them.

The château dominating the town

The present, ruined, château replaced the original one during the 13th century. It was built in 1253 by the townspeople on the orders of Alphonse de Poitiers, the brother of Saint Louis IX, when he became Count of Toulouse. This was a display of royal power after heretical Catharism had been suppressed in the region.

The château experienced further upheavals before settling into a period of decline. The English were in charge for 10 years during the Hundred Years’ War. The Protestants held it during the Wars of Religion until they were starved out by Catholic forces.

Finally, the Croquants took it in 1643. They were a force of 10,000 protesting peasants and craftsmen, fed up with years of disease, famine and taxes, on the march from Marcillac. The chief minister Cardinal Mazarin sent the army in and they didn’t last long. Their three leaders were condemned and their bodies broken on a wheel. 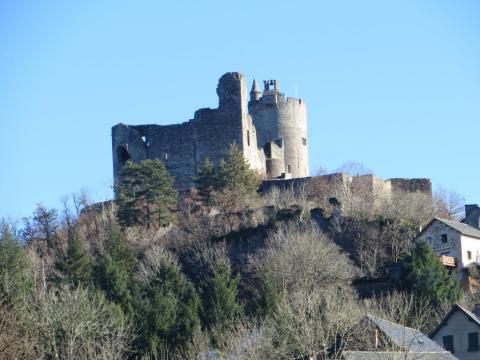 The château from the other side. The ruins more in evidence.

Although uninhabitable today, the château is in surprisingly good condition, despite having been pillaged for stone during the 19th century. Its archères (narrow slits for archers) are the tallest in France (some say the world), at 6.80 metres. This allowed three archers at a time to use the same slit. And woe betide anyone who got pitched into the oubliette (dungeon). In keeping with its name, they were probably forgotten there.

The château is an historic monument and, although it’s privately owned, you can visit it from April to November. Find out more here.