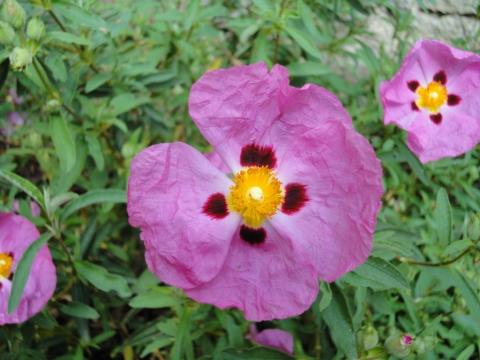 Today is International Women’s Day. It celebrates women’s achievements and highlights the plight of the millions of women around the world who are oppressed, living in abject poverty and certainly not considered equal to their menfolk.

Fellow blogger Finding Time to Write has written a great post, celebrating five of her heroines. Imitation being the sincerest form of flattery, I thought I’d follow her example and write about four Frenchwomen who particularly interest me.

I’ve chosen four because this post will become too long if there are any more. Here they are, an eclectic bunch chosen for a variety of reasons: political astuteness, literary skill, visionary principles and courage. No doubt others will have their own candidates.

Born c. 1122, Eleanor inherited the Duchy of Aquitaine at the age of 15. She married the future Louis VII soon afterwards. They were completely unsuited to each other: not that this was a consideration in the dynastic marriages of the time. The Pope eventually granted Eleanor an annulment on the grounds of consanguinity. She then married the future Henry II of England, who was nine years younger, bringing her duchy with her.

Eleanor and Henry had eight children, two of whom became kings of England. Two such powerful characters were not going to hit it off for long. And Henry imprisoned Eleanor for 16 years after she supported the rebellion of their son Henry against his father. She outlived Henry II and nearly all her children, dying in 1204 at the age of 82.

It’s unlikely that Eleanor ever did much for the cause of women and certainly wouldn’t have understood feminism. She left no personal writings, except for ducal decrees, so we know little of her opinions. But her strength of character and political realism are clear. She played an active role in running Henry II’s empire and in her son, Richard I’s government. And in various ways she left her stamp on European history for centuries afterwards.

Madame de La Fayette wrote one of the earliest (some say the earliest) novels in literature, La Princesse de Clèves. Born in 1634, she became a maid of honour to Anne of Austria at 16. This marked the beginning of her acquaintance with the French court and her literary education.

In 1655, she married the comte de La Fayette, who was 18 years older than her. Her contacts with the court and with literary circles progressed and she rubbed shoulders with the most celebrated writers of the time. Her own works were published anonymously, presumably because it wasn’t common at that period for women to publish.

La Princesse de Clèves has been hailed as one of the first psychological novels. It depicts the inner struggles of a virtuous young married woman who falls in love with someone else. It had considerable influence on later French literature. There’s no evidence that Madame de La Fayette was a revolutionary thinker. But she loved writing and must have had the strength of character to ensure that she could do it.

She was a local girl of fairly humble origins, née Marie Gouze, born in Montauban in 1748. After her husband died in 1770, she moved to Paris, became a playwright and campaigned against slavery and for human rights.

Although she initially welcomed the French Revolution, she quickly became disillusioned when it did nothing for the rights of women. She penned her own feminist manifesto, the Déclaration des droits de la Femme et de la Citoyenne (Declaration of the Rights of Woman and the Female Citizen) in 1791. She declared, ‘A woman has the right to mount the scaffold. She must also possess the right to mount the rostrum.’

Unfortunately, she went on to demonstrate that only the first of these rights was exercised in revolutionary France. Falling out with the revolutionary leaders, she was guillotined in November 1793.

Olympe believed passionately in the equality of men and women and thought society would be better if women could play an equal role in politics and other walks of life.

Simone Veil was born in 1927. She and most of her family were deported in 1944. With her mother and a sister, she was sent to Auschwitz and then Bergen-Belsen. Her mother died shortly before the camp was liberated in April 1945. Her father and brother were transported to Lithuania and were never heard of again.

On returning to France, Simone studied to become a lawyer and later became a magistrate. As a senior official in the Ministry of Justice, she improved conditions for women prisoners and worked to improve women’s general rights and status.

As Minister of Health between 1974 and 1979, she improved access to contraception and legalised abortion – both issues giving rise to heated controversy. She later became the first female president of the European Union and one of only eight women to be elected to the Académie Française.

She did a great deal to modernise legislation in respect of women, even if societal attitudes lagged behind. And she did so with an unflinching courage that must have been honed in the terrible conditions of the concentration camps.

Alas, some of today’s female French celebrities are famous for being famous or for their attractiveness to the opposite sex. Although women have made huge advances in nearly all walks of life, France remains a less than equal society, despite the Republic’s promotion of égalité.