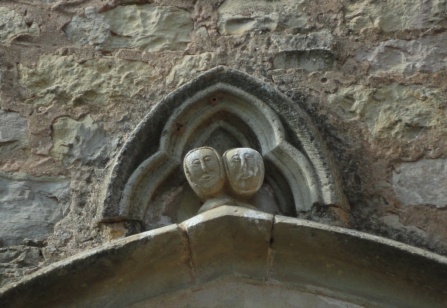 Figures above the church porch

Last weekend, we took part in one of our favourite events of the year: two days of rehearsals followed by a choral concert at the hilltop village of Puycelsi in the Tarn. This was the ninth year that these concerts have been held, in aid of the restoration of l’église Saint-Corneille.

The village itself is a dead end and the road spirals around the hill into the centre. The 14th-15th-century church is the focal point, its spire visible from a long way off as it rises above the fortifications. 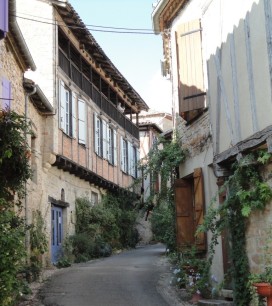 From the outside, the church is plain and austere. It is a fortified church, typical of the region, where many churches were the only protection against marauding bands. So you are unprepared for the sheer exuberance and vibrant colours of the wall and ceiling paintings that greet you as you step through the door.

Detail on a pillar behind the altar, reflecting the grapevines for which the area is known

I have to admit that they are a little over the top for my taste. Nonetheless, they are precious and worthy of preservation. The church interior is gradually being restored to its former glory.

This year marked the completion of one of the side chapels, which was covered in scaffolding when we sang there last April. But there is still a long way to go before the restoration is complete.

Before – restoration in progress

After – restored side chapel

Our rehearsals took place throughout the weekend, under the baton of Mark Opstad as usual, with Nicholas O’Neill on the organ. When the time came to change into our concert gear, I discovered that I had forgotten to wash my white blouse, which was visibly dirty. Fortunately, the SF had brought a spare white shirt. Unfortunately, it looked like a tent on me. However, I don’t suppose anyone noticed.

This year’s concert featured Handel’s “The King Shall Rejoice”, an energetic anthem written for George II’s coronation in 1727. It has a fiendishly difficult “Alleluia” at the end, with which Handel apparently amused himself. This was followed by an organ solo: the famous Bach “Toccata and Fugue in D” and a Brahms choral piece.

It rained during the interval, which was helpful, since most of the audience stayed in the church and we got going again quickly. The finale was Haydn’s “Missa in Angustiis” (Mass for troubled times), one of 14 masses he wrote. It was composed in the throes of the Napoleonic Wars and became known as the Nelson Mass, after Admiral Nelson’s naval defeat of Napoleon at the Battle of the Nile.

Next year marks the 10th anniversary of the Puycelsi concerts and I’m sure something special is planned. It certainly feels special to sing there and it attracts capacity audiences each time.

Unconquered Citadel: Puycelsi
Trip Along the River Aveyron
A Birthday to Remember: Mozart at Puycelsi

3 Responses to Singing at Puycelsi