Le Drapeau Tricolore: How France Got its Flag 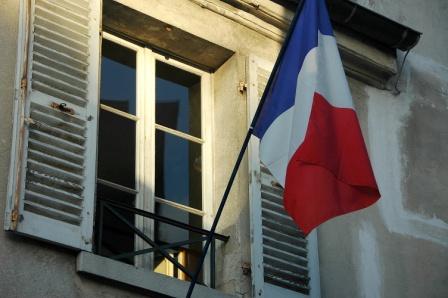 Today, in homage to the victims of the terrorist attacks in Paris on 13th November, President Hollande has asked people to hang the French national flag, le drapeau tricolore, from their homes. We don’t have one and, where we live, few people would see it, but I can do it symbolically via this post. And, as often happens, this spurred me to find out more about the origins of a national emblem that we tend to take for granted.

Identifying other countries’ flags is one of those post-Christmas lunch games at which I’m hopeless. However, after the Union Jack, le drapeau tricolore is one of those I was able to recognise from an early age.

Le drapeau tricolore is ubiquitous in France. It hangs from public buildings and war memorials and graces official correspondence. And, of course, it is emblazoned across rugby and football fans’ faces.

Apologies for the simplification below but it’s more complicated than I had at first supposed and several interpretations of the symbolism exist.

The three vertical stripes of equal width – from the flagpole: blue, white and red – are deeply rooted in France’s history. According to some interpretations, blue was identified with Saint Martin, who has long been associated with French royal heritage. Red represented Saint Denis, a martyred bishop of Paris. White symbolised the Virgin Mary and was later the colour of Joan of Arc’s standard.

The pre-revolutionary royal flag was commonly a blue coat of arms, featuring gold fleur de lys, on a white background. Blue and red are the traditional colours of the city of Paris. Revolutionaries wore blue and red cockades (rosette-like ribbons) on their hats and, to symbolise a break with the past, the First French Republic adopted a tricolore in October 1790. However, the colours were red-white-blue, and were reversed in February 1794.

Following Napoleon’s defeat in 1815 and the restoration of the Bourbon monarchy, the tricolore was abandoned in favour of a white royalist flag. It was adopted again following the July 1830 revolution and has remained the national flag ever since, symbolising the republic.

The Vichy government retained the flag during World War II, but dropped the word republic. Pétain added an axe to the white section and used it as his personal standard as head of the French state. The use of le drapeau tricolore was enshrined in the constitution of the 5th Republic in 1958. Today, the three colours represent the Republic’s key principles – Liberté, Egalité, Fraternité.

France may have a national flag, but each of its regions has their own as well. Our region, Midi-Pyrénees, was created only in the 20th century but nonetheless has a certain identity, since much of it was ruled from Toulouse in the Middle Ages. Its flag is the Occitan cross, below. However, it will merge with neighbouring Languedoc-Roussillon in 2016 as part of the rationalisation of the 22 mainland regions to 13. Interesting to see which flag the hybrid region adopts.

Occitan flag – the symbol of the Midi-Pyrénées Region

Anniversary of La Marseillaise – or Should that be La Strasbourgeoise?
Bastille Day
What Symbolises France?
May 1st – la fête du travail in France

14 Responses to Le Drapeau Tricolore: How France Got its Flag