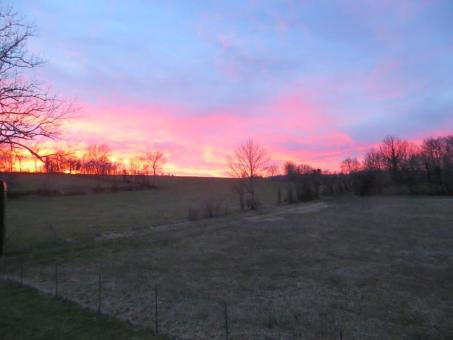 We had a number of sunsets like this in December

First, bonne année to everyone. I hope you had an enjoyable and relaxing Christmas. We are having a dry January – no, not the weather, which is the opposite. Rather, we’re not imbibing any alcohol, except the odd glass if invited out. This is hard when you live in France with access to countless varieties of wine. But we feel we owe it to our livers and our wallets.

Apart from a quick foray on Saturday, when virtually everything was closed, today was our first visit to the village since New Year. Tuesday is market day. Just after New Year, this involves the ritual of greeting and kissing acquaintances and wishing each other the traditional formula “Meilleurs voeux – surtout pour la santé” (Best wishes for the New Year – especially for good health).

We have just experienced an unusually mild and dry December. The SF (Statistics Freak to new readers) has been crunching away to produce the numbers and is a bit vexed that I’ve waited until now to post them.

We have developed a subjective assessment, by which we assign each day a plus if it’s fine, a minus if it’s bad and a zero if it’s indifferent or we can’t decide. In December, we had:

The graph shows the percentage of plus days each December for the past 18 years (the line is the trend). We ricocheted from the joint worst December ever in 2014 to the best ever in 2015, which also skews the trend.

Proportion of plus days in December over 18 years

The weather was perfect for walking and we took advantage of it last week. The lack of rainfall meant we usually came home wearing clean boots. However, it reverted to type on New Year’s Eve and it’s been chillier and damp since then.

Our rainfall stats go back to August 2004. In December we had only 8 mm and most of that was on 31st December. The average for the month is 72.1 mm. It rained on only two days: normally, you would expect eight.

Despite the dry autumn, the annual rainfall is still 98% of the average at 767.5 mm compared to the 784.9 mm we would normally expect. Some months were unusually wet while others were exceptionally dry. 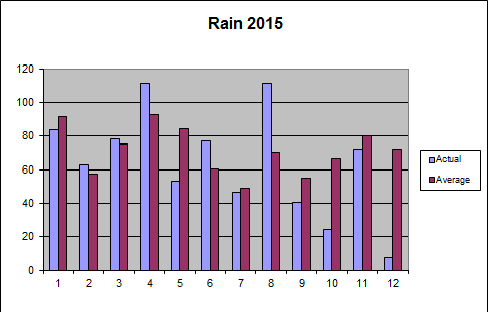 Normally, dry, sunny weather in December equals more frosts, but we had only six. This is significantly less than the average of about 10. We had as many as 20 frost nights in December 2001.

So far, the weather is still relatively mild, although the rain is falling as snow on the mountains. The wind only has to turn to the east for the same to happen here. What do the dictons (sayings say)?

I imagine that this is because one is lulled into a false sense of security. It can turn very cold in February.

We moved to an 18th-century farmhouse in SW France in 1997. I'm fascinated by French history, rural traditions and customs. I also write historical novels and short stories.
View all posts by nessafrance →
This entry was posted in Weather and tagged climate, France, Meilleurs Voeux, Mild December, rainfall, SW France, Weather. Bookmark the permalink.