Today marks the anniversary of the end of World War II in Europe. The annual ceremony in our village is always a moving event, attended by local dignitaries and representatives of the nearby military camp, the site of resistance activity during the war. In 2020, no public ceremony is taking place, owing to the Coronavirus crisis.

The ceremony involves wreath laying and a speech by the Maire at the Monument des Morts (war memorial).

It then moves to the resistance memorial further down the main street, which commemorates a number of Résistants who lost their lives. Three of them were young men who died during a skirmish with German troops on that very spot in July 1944. 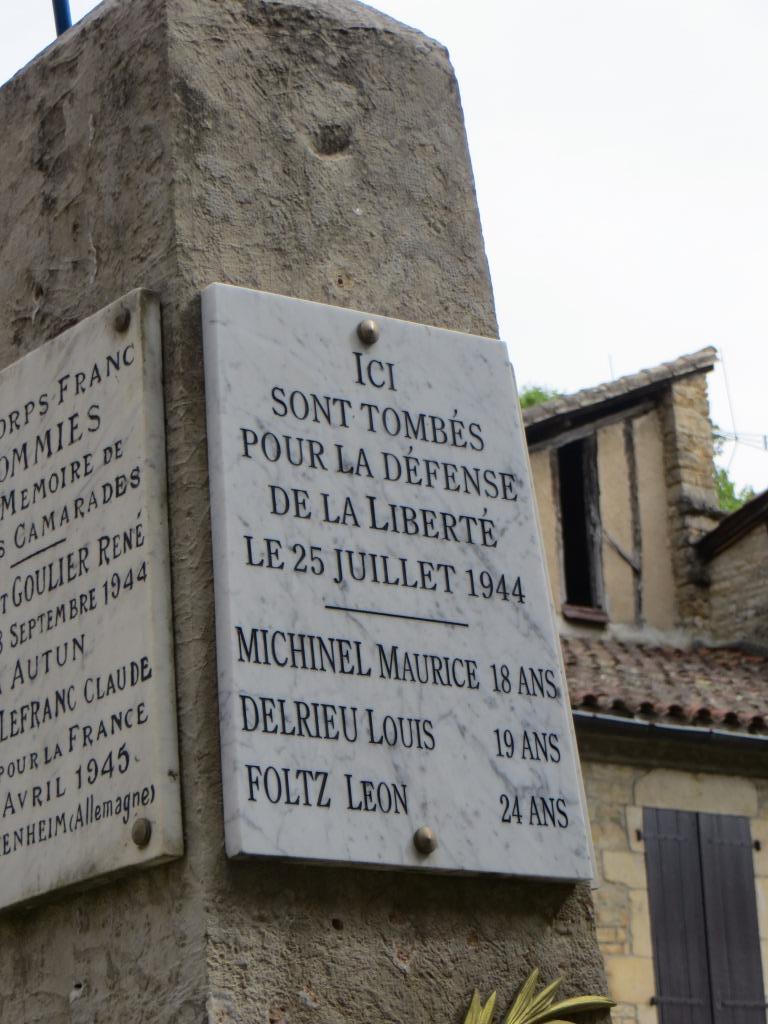 This area was liberated in the summer of 1944, following the Normandy landings. That was the occasion for an outpouring of relief that the Occupation was over. Public dancing had been forbidden by the Vichy “government”, but after the liberation people resumed it with such frenzy that the provisional government had to ban it again in October 1944. It was felt that public dances were inappropriate while so many remained in German captivity (see below). They were reinstated in April 1945.

The liberation also unleashed an outburst of retribution against suspected collaborators. A book I read about the internment camp at Septfonds described a local woman who quickly rode off on her bike, never to be seen again, when she feared reprisals for her wartime activities.

I would be fascinated to know what life was like here between the liberation and the formal end of the war in Europe. We have, very tentatively, broached the subject with locals who are old enough to remember, but have invariably been met with indifference (feigned?) or stonewalled.

This is hardly surprising. The Occupation wasn’t France’s finest hour. And the population occupied a spectrum from active resistance, through passive resistance, keeping their heads down, profiteering on the black market and informing to active collaboration. What country that has ever been occupied doesn’t present a similar typology?

In our own village, a monument to Maréchal Philippe Pétain, who headed the Vichy government, was inaugurated on 6th September 1942. Pétain was taken to Germany in August 1944 (where he refused to take part in the government in exile), but the monument remained until 10th May 1945, two days after VE day, when it was demolished.

Post-liberation France was still subject to rationing, although people in country areas probably had it better than those in the towns. Fear of a Soviet-inspired insurrection meant that the fabric of local government and public order had to be rapidly restored.

This was complicated by the issue of “les Absents”. These included prisoners of war; Jews; slave labourers; people who went to Germany as part of Vichy’s Service de Travail Obligatoire scheme; and political prisoners who were deported to Germany in droves from June 1944 for fear of their involvement in armed resistance. In total, they amounted to about two million people.

When municipal elections were reinstated in 1945, there was an outcry in some quarters that these citizens were unable to vote. The elections were duly postponed but took place in late April 1945, before many of les Absents had returned. In fact, some people were elected in their absence, even though they had already perished in Germany.

I have so far been unable to unearth figures for repatriated deportees and PoWs in this area. But, as the revelations about the concentration camps came out, people were increasingly outraged. And examples exist in other parts of France of vigilantes carrying out extra-legal “purges” on people who were suspected of having informed on deportees.

I can’t hope in a short blog post to convey anything but a flavour of the complexity of the situation at the time. But the myths and mists of time are rapidly gathering around the history as the people who lived through it die. History is never as black and white as we would like it to be.