Our Village Fête: Yesterday and Today 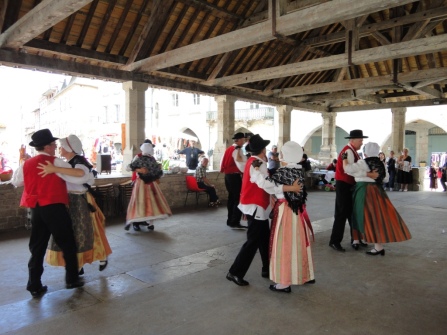 Traditional dancing at our fête several years ago

We went to our village’s Fête de Pentecôte (Whitsun fete) last Monday. It’s still an important local event, but in times past it was among the bigger fêtes in the region. We have a lovely book of photographs showing our village between 1900 and 2000. Local people lent their photos and postcards – an amazing 616 in all were reproduced in the book. It includes a section devoted to les fêtes de Pentecôte.

The 1960s marked the event’s apogee. Up to 12,000 people turned up in certain years. One of the photos shows the main street of Caylus blocked by the throng. I wonder how they diverted the traffic? These days, it would be impossible to close it, since it’s a major road.

Among the attractions was a carnival parade with imaginatively decorated floats. A troop of Gais Lurons (the best translation I can find is likely lads) always brought up the rear. In one photo, they are dressed as majorettes. Difficult to imagine the sober Caylusiens doing that today…

The fête also included a grand prix cycle race sponsored by the shopkeepers and a bal des célibataires (unmarried people’s dance). The latter was renowned in the region as the place to find your intended. There’s still a bal but these days they dance to the dulcet tones of Johnny Hallyday rather than those of Charles Trenet.

Times change and today the fête is a less extensive affair. Even so, there’s a lot going on and some recent innovations. One is a series of guided walks organised by a local association, Caylus Notre Village. Among other things, they are involved in a project to restore the former lavoir (wash-house), constructed in 1922. 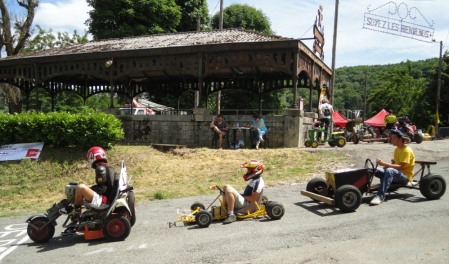 The walks take in parts of the commune you wouldn’t normally see and reveal hidden aspects of the local historical heritage. The SF and I chose the middle walk of 12 km which led up a steep hill onto the causse (plateau) and followed a former Roman road.

We stopped in a pretty hamlet by this cazelle (Quercy name for a shepherd’s hut), also called a gariotte in the Lot or a borie in Provence. The area is peppered with them, a legacy of the days when sheep farming was dominant. Sometimes they are free-standing buildings, sometimes they were built into a wall.

Cazelles are constructed entirely of stone. The roof is made of overlapping flat stones (lauzes), assembled so that no supporting wooden structure is necessary.

Nearby, we saw this well-restored pigeonnier (pigeon loft). The region is renowned for them, in many different styles. You can read more about them here.

Lavoirs are also liberally scattered around the region. This one is quite far from any habitation, but they had to be built where there was a spring to feed them. Up on the causse, there are few streams and so the choice of site was limited. 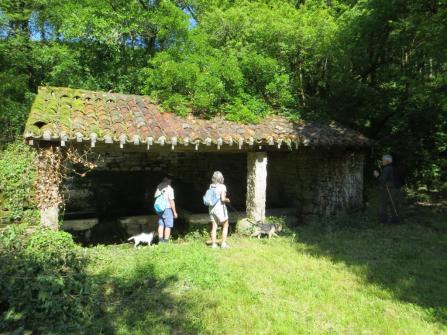 The women had to lug the washing there and back. We often forget how hard everyday life was. Even so, there was a social element to the lavoirs, which no longer exists. 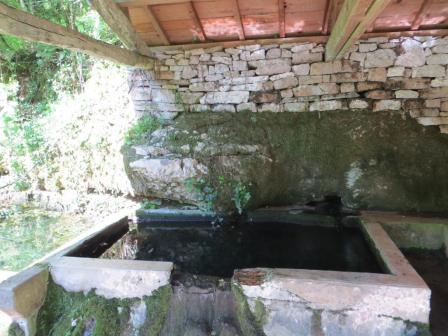 18 Responses to Our Village Fête: Yesterday and Today