I’m always torn between sharing places I love with other people and keeping them to myself. After a fierce internal tussle, the altruistic side won. The Cantal is a part of France to which we keep returning, although our last stay was nearly three years ago. Another fix of this stunningly beautiful, former volcanic area was long overdue.

Normally, we stay in the village of Thiézac, north of Aurillac. This time, on the recommendation of a reader, we headed to the other side of the Cère Valley. La Roussière is a handsome former farmhouse, built of the local stone. It sits at the end of a narrow and winding chemin beside the rushing River Goul.

Brigitte and Christian, who formerly lived in Brussels, fell in love with La Roussière about 15 years ago. They restored the farmhouse, which had been abandoned for years. A photo album shows the stages of the renovation. In the process, they discovered a former chapel, of whose existence they were unaware and around which the house had been built. Brigitte told us that La Roussière was once a hamlet. Because it was so isolated the priest doubled as the schoolteacher.

Simply but stylishly decorated, our large and very comfortable suite overlooked the river valley. I love the sound of flowing water and had to keep opening the window.

You eat breakfast in the large and well-equipped kitchen with the other guests. This is so much more convivial than staying in a hotel and you meet interesting people. They included a mild-mannered former restaurateur who had said to his wife one day, “Either I jump out of the window or I kill a customer.” “We’ll stop, then,” she replied.

We enjoyed freshly-squeezed orange juice, yogurt, croissants, bread, a wide range of home-made jams and cheese (the SF was in seventh heaven). Just what you need to stoke up for a day’s walking.

Brigitte and Christian also do table d’hôtes dinner on some nights of the week with delicious home-cooked local specialities. For their nights off, and fortunately for a place as remote as this, there’s a restaurant at Pailherols about 8 km away, l’Auberge des Montagnes. In fact, we stayed there more than 20 years ago before we moved to France. Be warned: the set menu is copious, so if you’re not that hungry go for the à la carte.

Jacqui, if you read this, cheese was definitely on the menu: Cantal, Salers, fourme d’Ambert, Saint-Nectaire, chèvre, etc. And it made an appearance in local dishes such as truffade, made with potatoes and young tome cheese.

This, of course, was our visit’s raison d’être. On day 1 we took an 11 km circular route directly from La Roussière. The weather was perfect for walking, the countryside green and lush and the wild flowers dazzling. We soon found out why: it was pretty wet underfoot in places. 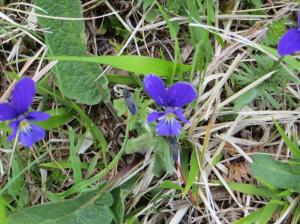 Hedgerows full of these

The walk took in the village of Saint-Clément, of which Christian is the mayor. Today it has 66 inhabitants (2013 census); in 1831 it had 672. Christian is also a mountain guide and told us which sights to look out for. This included an ancient and primitive cross.

Further on, we found another, even more primitive-looking cross, fashioned from the local volcanic rock with harder stones embedded in it. The rock itself had been worn away by the elements over the years.

Day 2 took us back to a perennial haunt: Elancèze, a peak of around 1600 metres that overlooks both the Cère and the Jordanne valleys. We must have done that walk a dozen times but we never tire of it. It’s a stiff climb but the view is breath-taking and we were blessed with clear, sunny weather. We had the place to ourselves as we consumed our picnic.

Some of the peaks, including the north face of Elancèze, still sported quite deep patches of snow. Brigitte told us it had snowed on 1st May. Every winter they get at least one period when it snows 60-70 cm.

As we swigged a well-earned beer in Vic-sur-Cère, I determined not to leave it another three years before returning. And one day I simply must meet my reader Osyth who has a house up there.

And I’ve linked up with the #AllAboutFrance linky, where you’ll find some other great blogs about France.