C’est l’été and the weather has finally caught up with the calendar. We’ve had wall-to-wall blue skies and hot sunshine for the past few days. This was a particularly good thing this weekend, since we sang in a concert featuring Mozart’s Requiem in the riverside village of Marcilhac-sur-Célé in the Lot. The concert was in aid of the restoration of the ruined abbey there.

In the event, it was a bit hot for the singers, enveloped in our concert gear, but the good weather tempted out 150 people and the abbey church was packed. We were even graced with the presence of a bishop and a cardinal. The concert was dedicated to the victims of last week’s Nice attack.

Back to less elevated matters. The SF (my husband, the Statistics Freak to the uninitiated) is beside himself because I haven’t posted about the weather for a couple of months, judging a monthly report to be overkill. However, since so many events over the past few weeks have been dependent on good weather, I’ll humour him. Luckily, the weather for our fundraising fête at the end of June for the restoration of the 15th-century chapelle de Teysseroles was perfect.

I think it’s fair to say that this was the worst spring we have experienced down here. Not only was it wet, but it was also chilly and grey. We have remarked that the first six months of the year are getting worse, while the latter six months are improving. We have had some luminous autumns.

So let’s grit our teeth and look at the grim reality. We give every day a plus (good), minus (bad) or zero (indifferent or we can’t decide).

In 18 years we have had only one worse May and one equal. No June has been worse than this one, but one was equally bad. The charts below show the proportion of pluses for these two months over time; the line is the trend.

May weather over 18 years 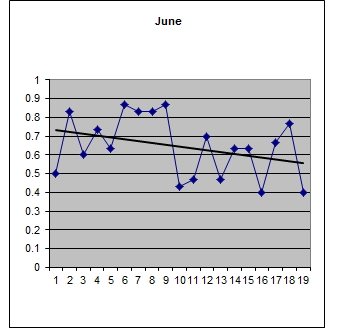 This presents a pretty miserable picture at a time of year when you’d expect a higher proportion of plus days. The only consolation is that the garden was burgeoning and the countryside greener than I’ve ever seen it.

To finish, here’s a shot of the interior of a lovely little nest that a pair of goldfinches constructed in the vine that stretches across our garage. I was alerted to their presence because it’s unusual to see birds flying in and out of the vine. I have to admire their persistence. They succeeded in raising a brood of three chicks, despite a lot of daily disruption.

The inside of the nest is beautifully soft. I read that they line it with thistledown. The day before the fledglings left, I heard the parents in the trees enticing them out with a silvery song. I hope they’ll come back next year.