Calvignac taken from the Château de Cénevières on a hazy day

I often find the smaller places in rural France more interesting than the big cities or the real tourist honeypots. They have their own intriguing histories, their hidden features, and to me these are more satisfying than the roads much travelled. A month ago the writing group I belong to visited the Château de Cénevières overlooking the River Lot. After that, we went upriver to the perched village of Calvignac, where I stumbled upon what may be an untold story.

No doubt Calvignac gets its share of summer visitors. It’s a picturesque place in a fantastic setting overlooking the river and it’s on the beaten tourist trail along the Lot. Cénevières and Saint-Cirq-Lapopie are only a few kilometres downriver. Even so, on the July day we visited there weren’t many others around.

One reason for visiting was to view a couple of art installations that are part of the Exoplanet Lot project until 4th September. Here’s one of the installations right at the top of the village, overlooking the valley.

Calvignac has probably been occupied since prehistoric times and the area is peppered with dolmens. In the 8th century, it was listed as one of the possessions of the Duke of Aquitaine. From its heights you can see both up and downriver, making it a place of great strategic importance at certain times. This was certainly the case during the Hundred Years War, when it was lost to the English in 1345 but regained in 1358.

Apparently, the village remained faithful to the French Crown right up to the Revolution. In the 19th century it prospered thanks to the cultivation of tobacco and vines in the fertile ground by the river.

Gem of a church

The church is a little gem. I love these small, rather bare rural churches. One interesting feature was the ceiling, partially faced with bricks. Stone was the customary building material here and I wasn’t aware that brick was widely used in this area. It was, of course, in the three pink cities, Albi, Montauban and Toulouse, since they are situated on river plains. And some buildings in Cahors are constructed of brick, but that’s well downriver of Calvignac. I’d be interested to find out more about this, so please leave a comment if you know about the use of brick along the Lot. 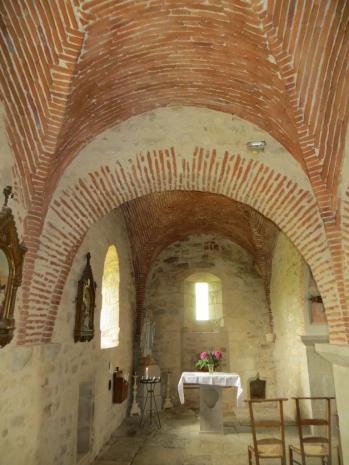 Church interior taken from the gallery

Although the day had started dull, it became hot and sultry in the afternoon. My friends and I were gasping for a drink. However, the only place we came upon in the upper village was the Terrasse Romantique restaurant, with a notice categorically stating that it only served meals. Nothing daunted, one of our group persuaded the waiter to serve us drinks and ice creams, which he smilingly did. The terrace, while a bit cramped, does indeed have a great view.

The untold story? At the back of the churchyard, behind a rather unprepossessing building, I came across this gravestone. It’s set apart from the rest and has a magnificent view of the river and the valley, although it’s unfortunately flanked by an unsightly wire fence and a satellite dish.

A certain Catherine Couderc lies there. My photo isn’t clear enough to give the dates, but she died sometime in the 19th century. Who was she? Why was she buried in that spot? Was it at her request? I can feel a story coming on, so I shall have to go back.

Since I wrote this, my friend Evelyn has found out more about the cemetery, but the story is more prosaic than I had first hoped. However, I still have a totally imaginary idea forming that I will follow up when I have a chance.