I’m constantly amazed at French people’s ability to conjure up a social event from unpromising components, whether it’s an apéritif, an improvised barbecue or a full-blown fête. Last night, some neighbours organised a repas de quartier, a neighbourhood meal, which are becoming all the rage. Everyone within a fairly wide radius was invited to bring dishes to share.

Some farmer neighbours started this initiative last year. Unfortunately, I was unable to go since I was in the UK, but the SF did a sterling job of representing La Lune. In fact, he did so well that he felt quite fragile the following day. I returned from Oxford to find our second car parked in a totally improbable position on our drive. “They kept handing round the apéros, and we didn’t get anything to eat until 10 pm,” he said.

Having learned from his experience, we decided not to arrive at the appointed hour of 19h00. We know that nothing in la France profonde ever starts on time, and so we waited until the more civilised hour of 20h00. People were still turning up long after that.

We didn’t have far to go. A farmer had mown a field at the end of our lane. Long trestle tables were set up, an improvised awning and festoons of lightbulbs were strung over the top, a sound system was blaring away in a corner and a barbecue was smoking away merrily. The weather was perfect, if slightly gusty. 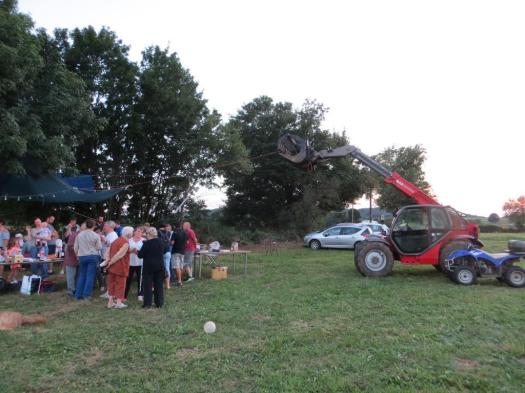 Novel method for holding up the awning

The quartier is obviously a rather elastic geographical unit and I wondered by what criteria people had been invited. Around 50 convives were there, some of whom we had never seen before. Luckily, we already knew quite a few, which after 20 years here we jolly well ought to.

It’s the French habit to go around and greet everyone at a party. I rather like this tradition, although things can take a long time to get started. However, it provided the opportunity to meet new people and also to talk to those with whom we’re on hailing terms but not much more.

Among our new acquaintances were a man who said he used to hunt around our house, the mechanic from the local garage (we didn’t realise how close he lived), a lady who makes fromage de brebis and sells it à la ferme, the goat farmer from up the road, a former resident who worked in the Michelin factory in Clermont-Ferrand and a man who has moved in recently and lived in London for 10 years.

As in all communities, tensions can exist between neighbours. This is certainly the case between us and the farmer whose inadequately fenced-in cows are always getting out. One of his calves drowned in our swimming pool until we fenced the property. However, these things were temporarily overlooked in the bonhomie of the occasion.

Dubious-looking apéritifs were thrust into our hands and we soaked them up with slices of pizza and bread topped with pâté. Sausages and ribs sizzled on the barbecue and we ate to the sound of corks popping and an increasing volume of chatter and laughter.

It was still going strong when we decided to leave.

“You can’t go without having some eau de vie de poire!” one of the organisers, Philippe, bellowed.

I steered the SF towards the car before he could change his mind about leaving.

This morning we emerged at around 11 am to go to the pottery market that is a feature of le 15 août bank holiday in our village. The field was swept bare. It was as if nothing had taken place. But we hope it will all happen again next year.

This post is taking part in the October 2017 blog linky. Click the image and you’ll find fascinating posts about all aspects of life in France.

Our Village Fête: Yesterday and Today
How a French Fête is Run
Getting a (Social) Life in France