It sounds rather like a jolly luxury express, doesn’t it? A competitor, perhaps, to the Orient Express, with starched white tablecloths, gleaming silverware and sycophantic stewards. If only it were. In fact, le “Moscou-Paris” is the meteorologists’ nickname for a wave of glacial air straight from Siberia, rendered even colder by a sustained wind, and it’s heading for us now. From Russia with love, indeed.

These episodes occur every so often when an anticyclone drags the cold air in from the East. Then, temperatures plummet to well below zero, often remaining negative during the day. Since the weather system is pretty substantial, the conditions can last for up to two weeks. Because of the wind-chill factor, the real feel can be well below the temperature actually recorded on the thermometer.

This is the third such episode we have experienced in our 20 years here. The first was around the year 2000. It occurred then in January and went on for a couple of weeks. The second was in February 2012 and also lasted a fortnight. On that occasion, our neighbours at the farm down the hill said the thermometer registered minus 18C one morning.

This time, le “Moscou-Paris” is happening rather late in the winter. It’s unusual for it to continue into March.

Where we live is the south of France. If you look at the map, it’s a long way down. The weather can be surprisingly cold here, though, because it has a continental climate. Also, we are 320 metres (around 1,000 ft) above sea level on the edge of the Massif Central.

Unfortunately, when you move here, no one tells you how freezing it can be – or how much you will spend on heating. In fact, some agents have been known to say only that you might need to heat for a couple of months in the winter. My response to that is not repeatable in polite company. 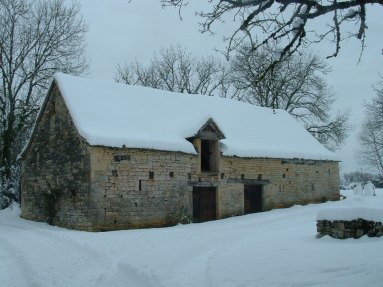 I have to admit that, when we are sitting in the shade during a canicule (heatwave) it’s hard to imagine huddling in front of the woodburner. Equally, when swathed in pullies, fleeces and socks, it’s difficult to contemplate plunging into the pit in the garden that we call a swimming pool. I suppose variety makes life interesting…

So far, however, we are fortunate not to have experienced some of the low temperatures that have become legendary. In January 1985, the temperature plunged to minus 22.5C at Caylus, the record low for Tarn-et-Garonne. Locally it went even lower. Monsieur F, our neighbour, says the thermometer touched minus 28C and they had terrible trouble watering the cattle because the pipes froze and the ice was solid in the troughs. [Incidentally, Caylus also holds the record for the highest temperature, 42.4C in August 2003.]

Happily, Météo France is not forecasting those sorts of temperatures this time. However, parts of the Alps and the Jura might experience a real feel of minus 25C.

Whatever happens, we have central heating, a woodburner and warm clothes. I shudder to think how it must be for the poor souls, the sans abri, the homeless. Although all the départements will activate their alertes grand froid to provide shelter for these people, there are bound to be some unfortunates who slip through the net. I simply cannot imagine what it must be like to sleep rough on an “ordinary” winter’s night, let alone during le “Moscou-Paris”.

How to Stay Warm in Winter
Winter Warmers: Chansons and Cassoulet
Nature Comes Back to Life

Thanks for reading. Shares always appreciated.

I'd love to know your thoughts. Please do comment. Cancel reply