I do like Cahors, an ancient city and capital of the Lot Département. Why is it, then, that we visit so infrequently? It’s more appealing than our own Préfecture, Montauban, and it doesn’t take much longer to get there. The town centre is more vibrant, has an array of tempting shops and offers a variety of things to see and do. I suppose it is a question of habit.

The SF had an appointment with a specialist dentist in Cahors last week, booked three months in advance, so I went along for the ride. It was slightly unfortunate that it turned out to be one of the hottest days of the year, but at least the narrow streets of the old town provide some shade.

As ever, we parked in the park-and-ride east of the town, on the other side of the River Lot. As Wednesday is market day in Cahors, we knew we were onto a loser trying to park any closer. However, we eschewed the navette (free shuttle bus) in favour of walking along the river with a magnificent view of the town on the other side. 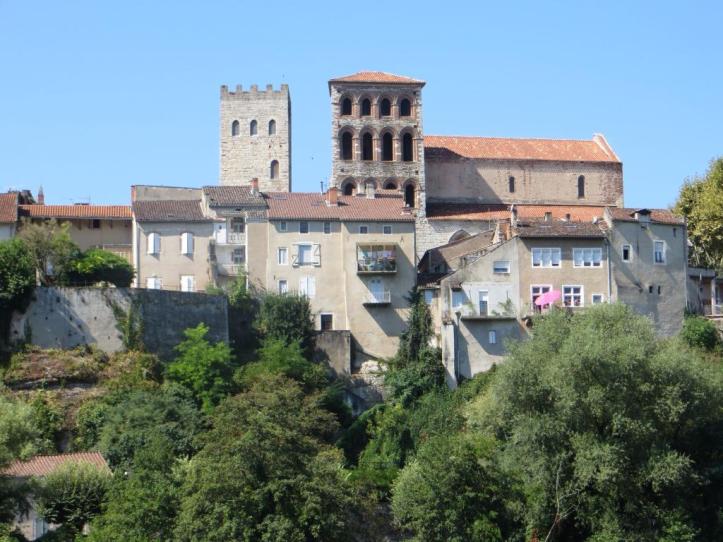 While the SF went to his appointment, at the rather inconvenient and very un-French time of 13h00, I refreshed my acquaintance with the old town.

I started in the market, which is held in the Place Jean-Jacques Chapou, dominated by the Cathédrale Saint-Etienne. It was still in full flow at lunchtime, with the ranks of the Cadurciens greatly swelled by tourists. The high buildings surrounding the square magnified the good-nature stallholders’ banter and the hum of busy market-goers.

The emphasis is on local produce, although the usual tourist-orientated stalls were there too. You can buy rounds of Rocamadour goat’s cheese, locally-cured charcuterie, crisp pastis (a regional apple pastry), fat Quercy melons, misshapen but delicious tomatoes and conserves made from almost every part of the duck or goose. And, of course, the black wine made from Malbec grapes, for which Cahors is famed.

Cahors also boasts a small covered market, containing about a dozen stalls. I lingered there for a while, people watching and furtively snapping scenes of interest. 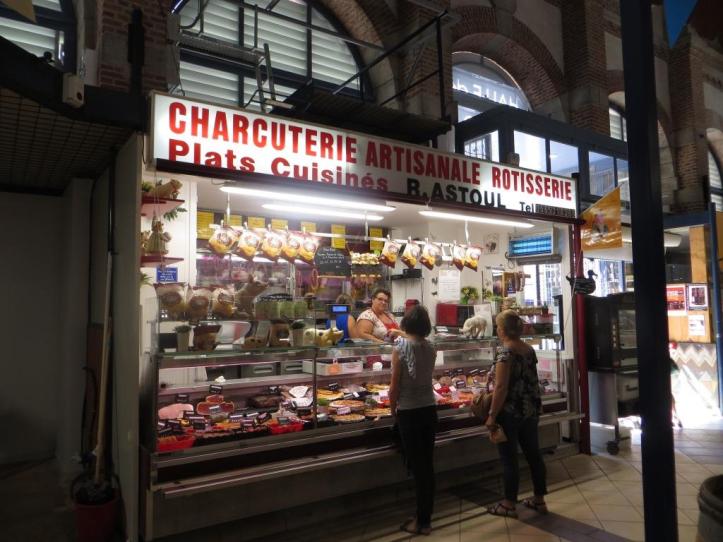 The sun was getting pretty hot, so I was glad to duck into the relative coolness of the cathedral, with its twin domes and pretty cloisters. The present cathedral was built in the 12th century over an existing 7th-century church. The façade was renovated in the 14th century. It’s a pretty solid-looking edifice. Like many churches built at that time, it has a fortress-like appearance.

One of the domes is ornamented with 14th-century paintings, showing the stoning of St Stephen (Saint-Etienne) and prophets riding on animals.

Cahors is on one of the pilgrimage Routes de Saint-Jacques de Compostelle. Periodically, you come across these brass scallop shells, the symbol of Saint-Jacques, set into the pavement, denoting the route.

Behind the cathedral you find one of the secret gardens that the city council has established in recent years. They are linked by a marked trail that starts at le Pont Valentré over the Lot on the western side of the town. In late August, after some blisteringly hot and dry weather, there wasn’t much in flower here. Neither could I find the way in, which I suppose must be inside the cathedral. In any case, it was time to meet up with the SF for a late lunch.

Since Cahors is a popular tourist spot, a number of restaurants cater for late lunchers. This was just as well, since we didn’t sit down until 14h15 at one of the brasseries in the Place François Mitterrand. 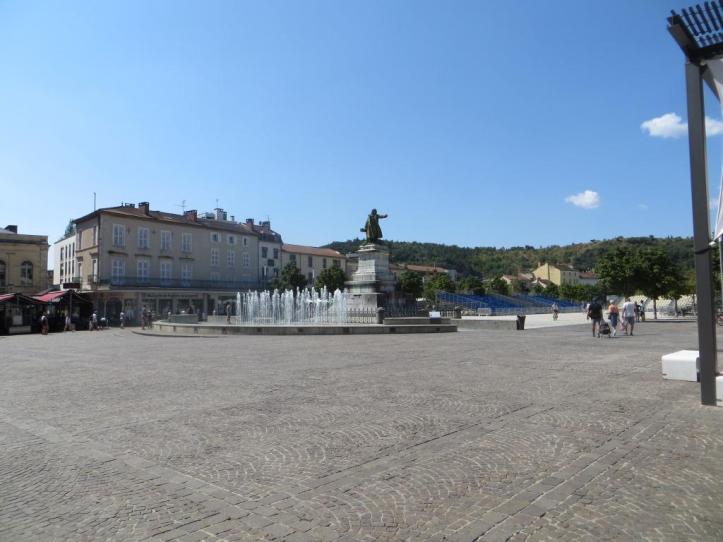 This enormous square houses the theatre and the tourist office as well as sporting a statue of the 19th-century statesman Léon Gambetta, one of Cahors’ most famous sons. The main street that bisects the town is named after him.

Beneath the square is an underground car park. The remains of Roman buildings, which were discovered during the building of the car park, have been preserved down there.

After lunch, with the temperature nudging 35C, the thought of further wanderings was not appealing. In addition, le Musée de la Résistance is closed for refurbishment, as is the main Cahors museum. We waited a long time for a navette which never turned up before reluctantly slogging back to the park-and-ride under a blazing sun.

Before we went, I had nurtured plans to go up to Mont Saint-Cyr, which I understand affords wonderful views of the city. Reader, it was too hot. That’s for our next visit.

P.S. We moved into our house here in SW France 21 years ago today. We’ll be raising a few glasses to that memory, which seems like it happened yesterday…