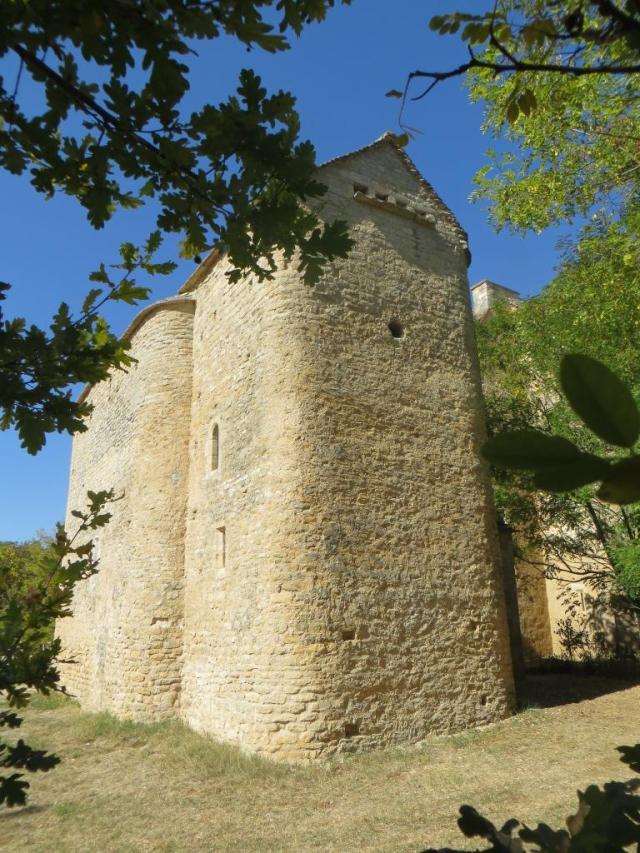 What do you think this building is? A small château or fortified house? A barn? All will be revealed below. Autumn is the best time for walking in this area. The days are warm and sunny, it’s usually dry underfoot (a little too dry until last night) and the leaves are turning to tawny brown. Knowing that the weather was planning to change, we decided to follow a walk that I have wanted to do for some time.

For a history nut like me, we are incredibly lucky that our region is packed with patrimoine, buildings and monuments of historic interest. Some are classed as historic monuments; others simply testify to rural life here in past times. Certain monuments are well off the beaten track, or can’t be reached by road.

Yesterday, we set off for Villeneuve-d’Aveyron, a historic and very well-kept Bastide town not far from Villefranche. It’s certainly worth a visit if you have the chance. From there, we set off along ancient tracks bordered by crumbling stone walls, through woods and fields. Many spots presented views of Villeneuve, built on a slight rise above the surrounding countryside. 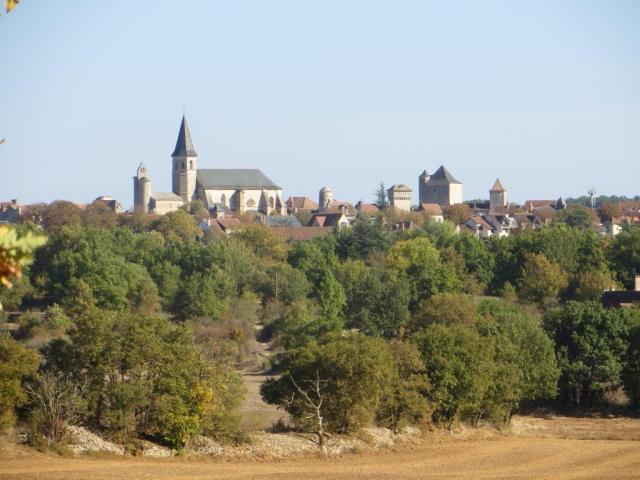 We passed through rolling scenery and peaceful hamlets, slumbering in the mellow heat. By car, we would have been intrusive. On foot, we were barely noticeable. We met very few people, except for a runner who appeared to use his dog as a means of forward propulsion and a polite little boy who asked if we were looking for something. No, thank you, we replied, we knew where we were. Apart from them, we saw a red squirrel, put up a partridge and frightened a deer – and plenty of blackbirds, which emitted their alarm call as we approached.

As we laboured up a steep slope, our efforts were rewarded by a superb view of le château de Ginals. This privately-owned château dates from the 14th century: the large square tower remains from that period. The rest dates from the 17th-18th centuries. Its main claim to fame is that Saint Emilie de Rodat (no, I’d never heard of her, either) spent her childhood there. Apparently, her religious vocation was revealed to her during that period. 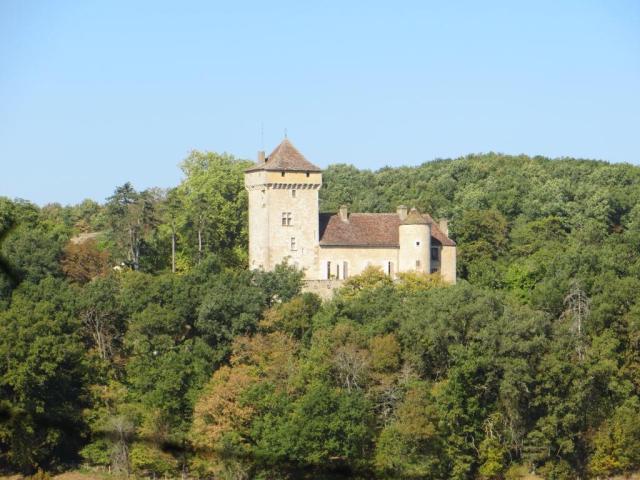 My main reason for doing this walk was yet to come, in the hamlet of Toulongergues. Back to the photo at the top. It is in fact a church, reputed to be the oldest in Aveyron. However, it has also been used for defensive purposes and as a barn. 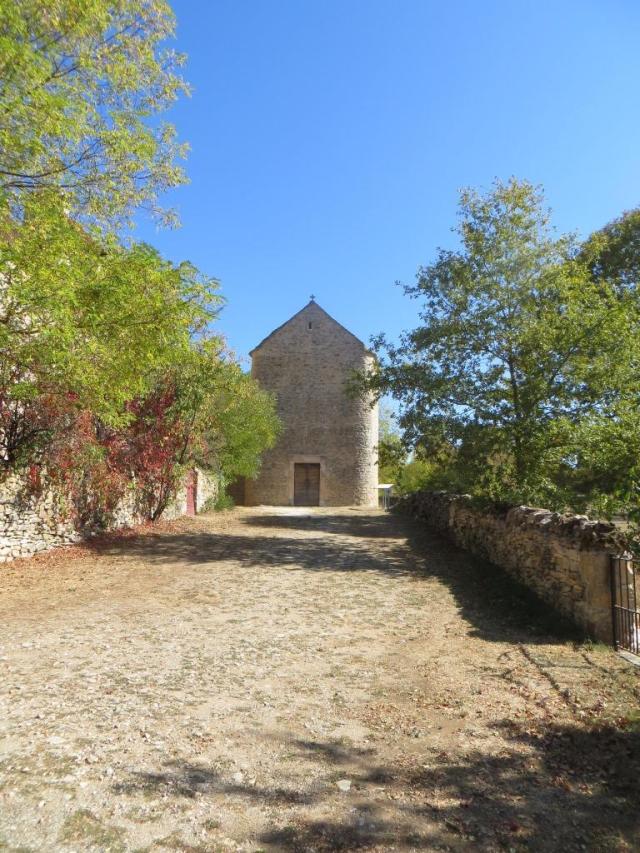 This pre-Romanesque church dates from at least the 10th century, the first documentary mention of it. Two things distinguish its exterior: first, the rounded angles of its walls, which are found on a few other churches in the region. It’s thought that this may have been for defensive purposes: it’s less easy for the enemy to hide around a curved corner than a straight one. The priory next door, sometimes referred to as “le château de Toulongergues”, is also fortified.

The church’s proportions are also exceptional. It’s around 12 metres high and less than five metres wide and has no buttresses. 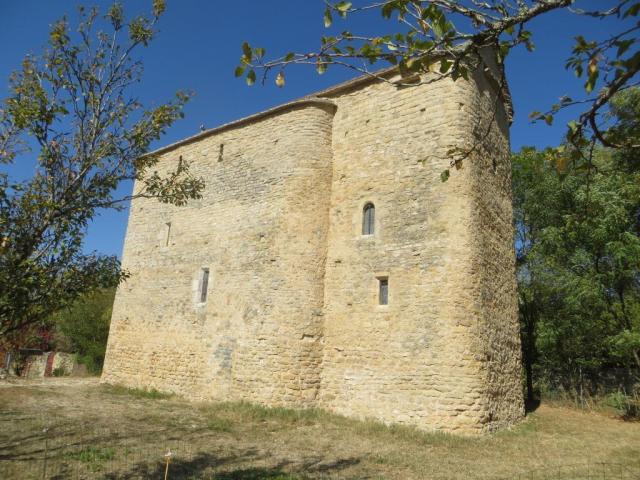 Side view showing the church’s proportions

The church was used as such until the Revolution, when the curé refused to swear an oath of allegiance to the Republic.  In the 19th century it fell into disuse and was finally sold in 1923 to a farmer, who converted it into a barn. In the process some of the 11th-century wall paintings were, sadly, effaced but some remain.

Like many rural churches, it was locked yesterday. The Tourist Office in Villeneuve organises guided tours, but only during the summer months. I was really hoping to see the remaining wall paintings, but this will have to wait. The best I can do is to point you to the photos on the site of the association that looks after the church. 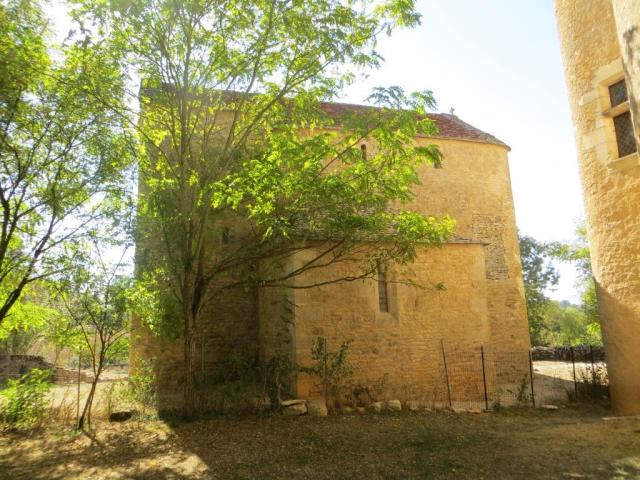 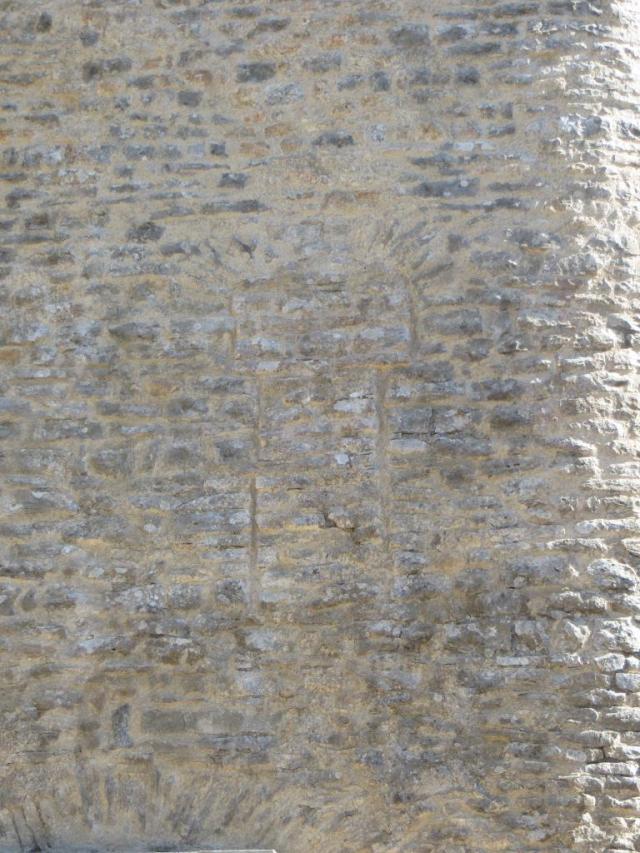 Door opening into nothing halfway up the front elevation. Perhaps a staircase led up there at one time?

At this point, we were still only halfway through the walk. Sitting on a stone in the shade of a cross, we ate our sandwiches. A jolly farmer on an ancient tractor wished us a cheery “Bonjour!” 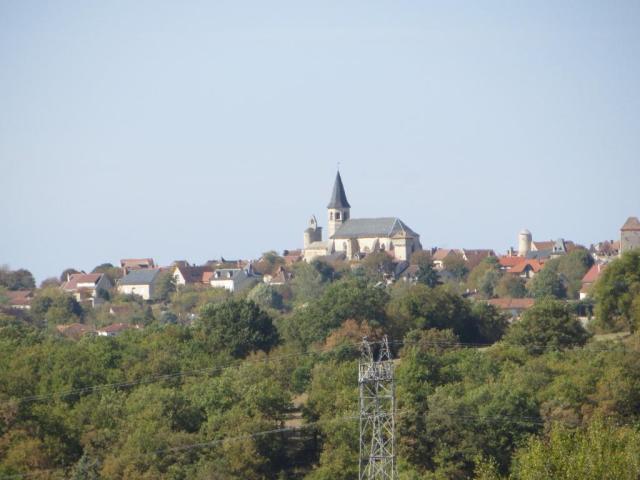 Villeneuve from another angle: pity about the pylon

To regain Villeneuve, we walked along a ridgeway bordered by sweet chestnut trees and yellowing bracken, from which the town was again visible. After 14 kilometres, we were tired and a little footsore, but rejoiced yet again in the simple delights that living here has to offer.

8 Responses to Villeneuve d’Aveyron: Ancient Paths and a Historic Gem