Today, our walking group chose a route that took in the Abbaye de Beaulieu, a magnificent Cistercian abbey that sits in splendid isolation alongside the River Seye. We walked along paths in woods carpeted with snowdrops behind the abbey and negotiated slippery wooden and stone footbridges over the rushing brook.

Looking at this well-preserved monument, it’s hard to believe that it was in such a poor condition in 1860 that it was in danger of demolition. It was only through the intervention of Prosper Mérimée – Inspector of Public Monuments and novelist – that the buildings were saved for posterity.

The Bishop of Rodez founded the abbey, probably in 1144, and it housed a dozen monks to start with. It’s not clear why they chose this particular spot, whose name derives from bellus locus in Latin or Belloc in Occitan. However, an old anecdote says that the chosen monks set off from Clairvaux to found the abbey in the Rouergue, bearing their only treasure, a wooden cross. After a long and tiring journey they stopped at a savage but beautiful place which suited their need for solitude. 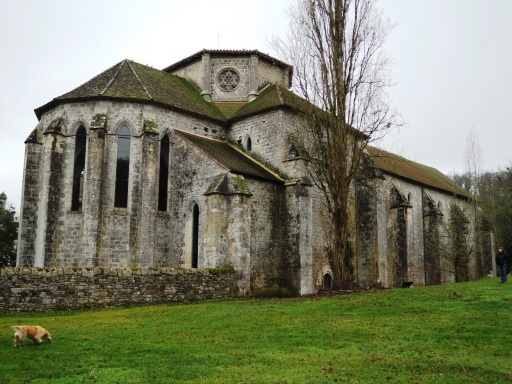 The abbey has had a chequered history. It prospered initially but was partially destroyed during the Albigensian Crusade and rebuilt in 1272. It sustained further damage during the Hundred Years War and the Wars of Religion. Lax discipline in the late 16th century also contributed to its decline. By the Revolution, only four monks lived there and the place was sold in 1791 to a family from Saint-Antonin. During the 19th century the place became a farm and there was a cowshed in the choir of the church.

Although the abbey became an Historic Monument in 1875 it remained in a terrible state until 1959 when two art-lovers bought it and restored it. This was a labour of love. We have seen photographs of the church at that time, literally metres deep in ancient cow muck, hardened to the consistency of concrete, which was allowed to accumulate on top of the ancient stone slabs.

Now a Monument Historique again, the abbey is a centre of contemporary art. Exhibitions are held in the church, whose majestic simplicity sets off the sometimes riotous colours and surreal shapes of the art. We have been to concerts and vernissages (exhibition previews) in the church, followed by repas champêtres or apéros in the cloistered courtyard. The abbey provides a wonderful setting for these events.

The other buildings have been restored and rearranged over the centuries. The monks’ former dormitories are now an exhibition hall. Their vivier (fishpond) is still there. At one time it would have been full of carp. Unfortunately, during the past decade green algae has invaded it, and despite several attempts to drain and clean the pond, it always comes back. It’s probably due to nitrates leaching into the stream that feeds it and rises in the hills above the abbey.

From Beaulieu we followed the course of the Seye before turning uphill again towards Lardaillé, the small hamlet from which we had started. We took a detour through an even smaller hamlet, Dreuilhe, where we saw this pigeonnier (dovecot). Most pigeonniers in this area are square, but this one is round and could well have been part of the abbey’s possessions during its halcyon days.