Loze: a Tiny Village on the Causse

Sometimes life takes you over. I’ve brought out two books in the space of a month and sung in two concerts, in Gaillac and a tiny hamlet near Puycelsi, in the past 10 days. I’m notorious for trying to do everything at once, but this is not always a recipe for success. So Life on La Lune has suffered a little as a result. Time for a little TLC.

This area is peppered with attractive and historic villages. It’s a pleasure for me to visit them and then to indulge my love of history by writing about them here. I hope I can give you some ideas for places to visit if you are planning to visit, or even if you already live here.

A couple of weeks ago, our walking group met in the tiny village of Loze on the causse (plateau), with a wonderful view along the Bonnette Valley. Loze is a very well-kept village with some lovely stone cottages. The village itself is on the Quercy side of the river, the ancient region that takes its name from the Latin for oak, quercus. But the commune straddles the valley and the hillside opposite, which is in the ancient province of Rouergue.

What’s in a name?

The name is interesting and has several possible origins. One is the Occitan word lòsa, which means mud or silt. This could refer to the terrain around the village (although I thought it was rather dry up there) or possibly to the soil in the valley below.

Another possible origin, which I find more plausible, is that it came from the word lauza, which means a flat stone. Formerly, these stones, about six cm thick, were used for roofing and you can still see them on pigeonniers, gariottes (shepherds’ huts) or wells. On the Cassini map of France, which was drawn up in the 18th century, Loze is spelled Lauze.

In this section from Cassini Map, Lauze appears at the top just below and to the left of Puy la Garde

There’s evidence that people occupied the area as long ago as 10,000 BC. The Romans were there, too, and left a Roman road that is now a series of dirt tracks. A château once belonged to the Counts of Toulouse, but little, if any, of it remains.

The first mention of the church is in 1112. A century later, it became part of the important Templar Commandery in Lacapelle Livron, just up the road towards Caylus. The church bell tower with a hat is a little unusual for these parts, this style being more common in the Auvergne. Normally, around here they have square towers or spires. 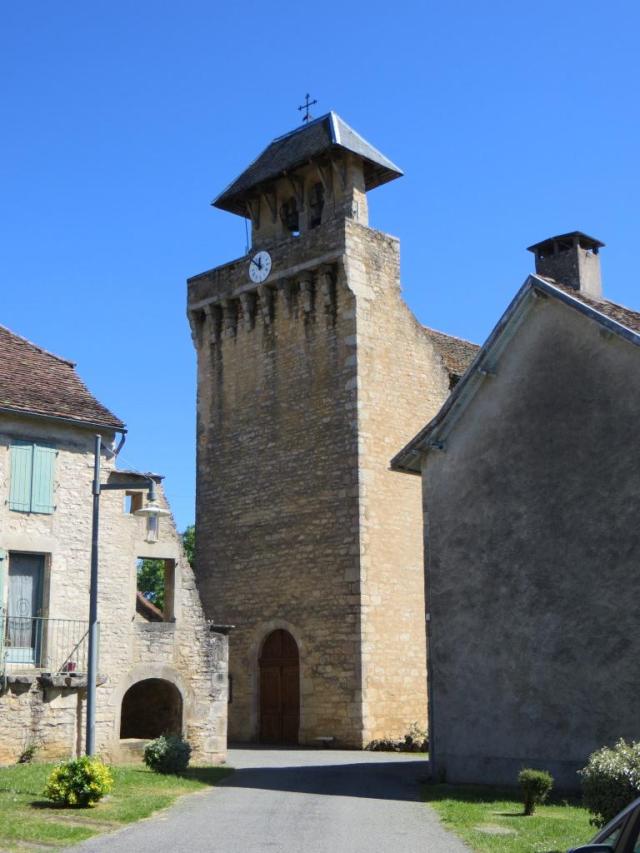 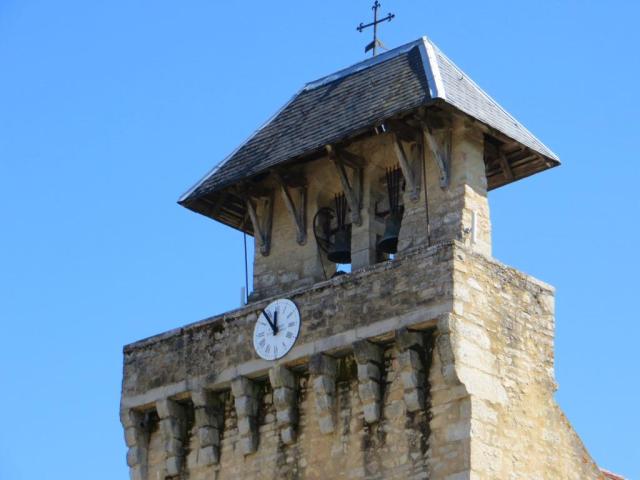 I have been unable to find any specific mentions of the village’s history, but I would be surprised if it emerged unscathed from the Hundred Years War, the plague and the Wars of Religion. All of those took their toll on the area.

As in most of these villages, the population declined hugely during the late 19th and 20th centuries. Its apogee was in 1800, when 667 inhabitants were recorded. By 1975, this had plummeted to 83 people. The most recent census shows a population of 139 in 2015. The accuracy of the 1800 figures might be called into question, but there’s no doubt that the difficulties of scratching a living on the causse and the progressive rural exodus after 1900 were responsible for the decline.

Fortunately, some have chosen to establish businesses in the commune. Le Mas de Monille, on the hill opposite the village with the Bonnette in between, is a farm where Gascon black pigs and Caussade hens are bred. You can buy the products and also eat there.

Down in the valley, Marie-Ange and Benoît Chamerois rear goats at le Moulin de Vignasse. They make delicious goat’s cheeses, which they sell at the local markets. Marie-Ange can be found at the Caylus Saturday market in the cheese season, always smiling and happy to explain the different cheeses. You’ll also find the cheese in local shops. Among my favourites are those which Marie-Ange rolls in a mixture of herbs and spices. 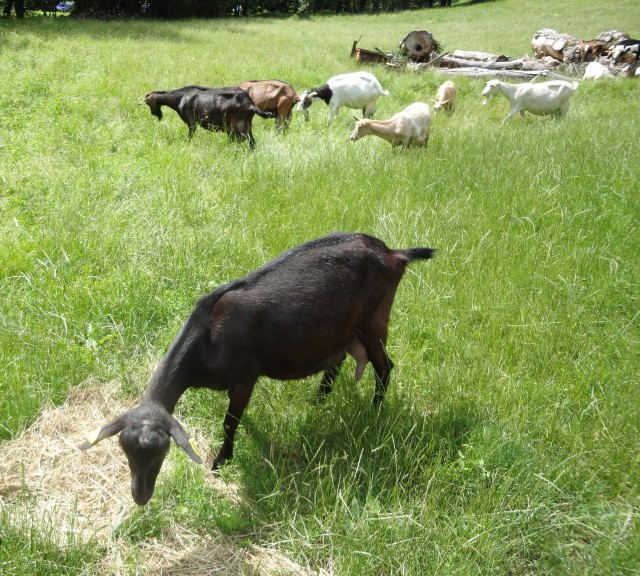 Despite the dryness of the causse, this is a land of water. In summer, the Bonnette reduces to a trickle. In winter and spring it can be a rushing torrent. The causse is riddled with limestone caves, gouged out by the underground springs. Some of them are home to bats and birds of prey.

The Loziens have made use of a cave near the village to set up a Christmas crèche every year. These photos date from several years ago and I haven’t visited it recently to see if the crèche has changed. It’s a rather nice idea, don’t you think? 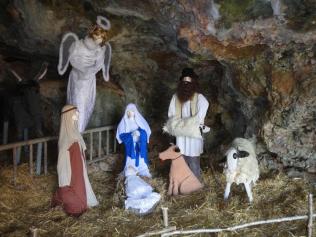 Crèche in a cave at Loze 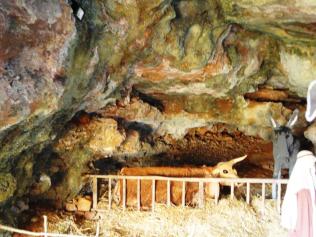 The ox and the ass

26 Responses to Loze: a Tiny Village on the Causse